Mass vaccination sites in Tokyo, Osaka open for people 18 to 64 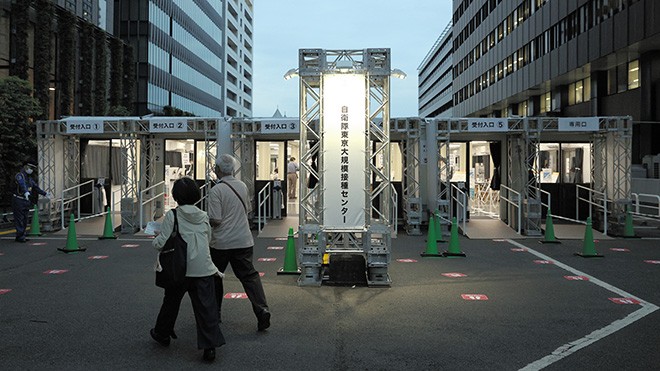 The eligibility criteria for getting a coronavirus vaccine at mass vaccination centers operated by the Self-Defense Forces in Tokyo and Osaka will be expanded to include people between the ages of 18 and 64, officials said.

The Defense Ministry announced the policy change on June 15, after it became evident that many vaccination slots were going unbooked.

People will be eligible to receive a shot there if they present a vaccine voucher issued by their local government and if it is their first dose.

The SDF vaccination centers will take reservations from June 16 and begin administering doses starting the next day at the earliest, according to the ministry.

The ministry is urging people with underlying health conditions and workers at nursing homes to get vaccinated early.

The centers opened in the two cities on May 24 to complete prioritized inoculations of people 65 or older by the end of July, under Prime Minister Yoshihide Suga’s directive.

Initially, the doses were limited to seniors residing in Tokyo, Saitama, Chiba, Kanagawa, Osaka, Hyogo and Kyoto prefectures who made reservations online.

But the ministry expanded the eligibility to elderly people across Japan on June 10, as appointments for doses between June 14 to June 27 had not been filled.

On June 12, the centers began booking appointments over the telephone.

The SDF administered doses to SDF members involved in risk management, law enforcement and firefighting, and Coast Guard employees on June 14 and 15 as many slots were left.

Official data shows that from June 16 to June 27, about 70 percent of 120,000 slots available in total at the Tokyo center remained empty. As for the Osaka center, about 60 percent of a total of 60,000 slots were vacant over the same period.

More than 80 percent of the slots at the centers from June 21 to June 27 were not filled.

The ministry said it will become difficult for applicants to secure an appointment after June 28, as the second round of shots begins that day.