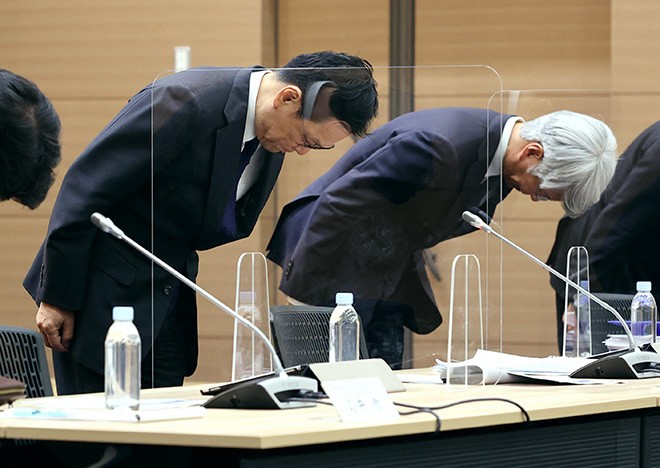 Top executives of Mizuho Financial Group Inc. will take salary cuts for a series of technological fiascos at its banking subsidiary that have been blamed largely on its business culture.

MFG on June 15 said Tatsufumi Sakai, president of the group, has received a 50-percent salary cut for six months, while the pay of Koji Fujiwara, chief executive of Mizuho Bank, will be slashed in half for four months.

Nine other executives, including those who are in charge of the systems department, will also receive pay cuts.

Fujiwara was expected to resign to take responsibility for the system failures, but the company will hold off on a decision until the Financial Services Agency issues a business improvement order to both Mizuho Bank and Mizuho Financial Group based on the Banking Law.

“The group will work as one and make an effort to prevent similar mistakes,” Sakai said at a news conference.

He also said that he will change the executive lineup if necessary.

A third-party panel on June 15 released an investigative report on the four large-scale system breakdowns that have occurred at Mizuho Bank since late February.

The report said no common technological cause was found for the four incidents. Instead, it concluded that human-related problems were largely to blame, such as a lack of awareness about the impact on users, organizational weakness in crisis response, and inadequate control over system management, including insufficient deployment of IT specialists.

The report said these problems “are not easily solved because of the bank’s business culture.”

The report revealed that 1,821 similar incidents involving malfunctioning ATMs occurred in 2018, but the bank did not improve the situation.

“We caused a great deal of inconvenience, but we looked the other way,” Sakai said.

In response to the report, Sakai said the company will change the specifications of its ATMs.

The company will also hire a top official from IBM Japan to assist the chief of Mizuho’s systems department and strengthen development of IT specialists.

In addition, MFG will establish an organization to analyze social media and appoint executives for crisis management to improve customer services if another system failure occurs.

The FSA has conducted a large-scale survey and interviewed people, including those from outsourcing companies, to find the root cause of the problems at MFG.

An FSA representative said the financial group’s corporate culture made it difficult to address the insufficient number of personnel in its IT department and correct its dismal post-crisis customer service.

“It is important for the companies to improve underlying corporate governance,” the representative said.

The FSA will urge the companies to submit an improvement plan that includes clarification of responsibility for the system failures and measures to prevent a recurrence.

Failures in Mizuho Bank’s computer system also occurred in 2002 and 2011. The bank renewed the system in 2019.

(This article was written by Kuniaki Nishio and Yuji Yamashita.)