Controversial law to limit land use near defense facilities passed 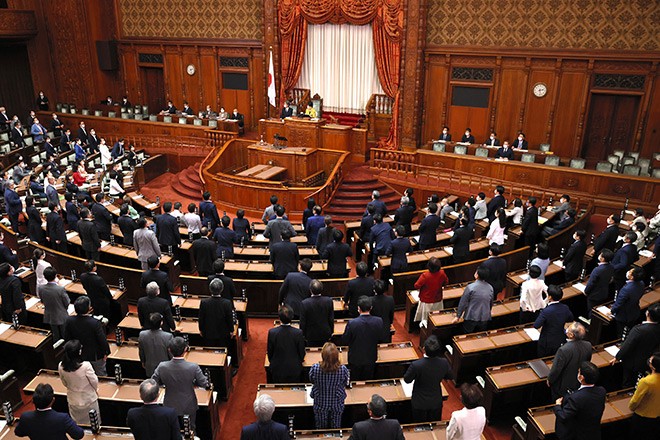 The Upper House passes legislation early on June 16 in a plenary session to regulate land use near important facilities. (Koichi Ueda)

Legislation that critics claim is designed to clamp down on protest movements near U.S. military and Self-Defense Forces bases in Japan became law early on June 16.

The law is designed to regulate use of land in the vicinity of important facilities such as SDF bases, nuclear power plants and outlying islands.

The bill passed in a plenary session of the Upper House with the support of the ruling Liberal Democratic Party, junior coalition partner, Komeito, as well as the opposition parties Nippon Ishin (Japan Innovation Party) and the Democratic Party for the People.

The law defines as “observation areas” land within 1 kilometer of important facilities as well as outlying islands that demarcate the national border.

Government officials will be allowed to check on the names and addresses of owners of land and buildings in such observation areas as well as the manner in which that land is being used.

“Special observation areas” are defined as those in the vicinity of facilities considered particularly important. Reports must be submitted prior to the sale of land of a certain size and buildings in such areas.

Government officials can also issue orders to stop undertakings that interfere with activities at the facility in question. If the orders are not obeyed, criminal penalties will be imposed.

Critics charge the provision is intended to restrict protests outside of SDF and U.S. military bases.

Government officials had argued that the law was needed because of the national security risk that might arise if foreigners purchased outlying islands or real estate in the vicinity of military bases.

But the wording of the legislation was vague in terms of the range of possible checks by government officials and what acts would be subject to criminal penalties. Cabinet orders are expected in the future to provide clearer definitions.

While the government said the law would cover 484 outlying islands and about 500 locations in the vicinity of SDF facilities, it did not present a list of the specific facilities to be covered.