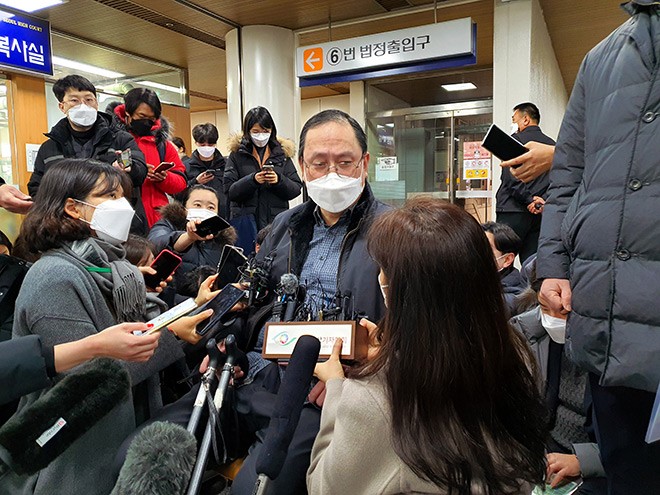 SEOUL--A district court is ordering Tokyo to disclose the assets it holds in South Korea in a bid to cover the legal fees of former “comfort women” in their lawsuit claiming wartime damages, sources said on June 15.

The order, dated June 9 by the Seoul Central District Court, is in connection with an earlier ruling siding with the plaintiffs on compensation.

The decision comes as a surprise, given that a different judge with the same court previously ruled against the seizure of assets to cover plaintiffs' legal expenses, citing international law. And it is difficult to predict how the court's decision will play out in the coming months.

The order follows the court’s January ruling that 12 plaintiffs are entitled to compensation for their or their relatives’ suffering from being forced to provide sex to Japanese troops before and during World War II.

The recent order was issued after the plaintiffs filed a request with the court to seize the Japanese government’s assets in their country so they can pay their legal expenses.

Citing the principle of sovereign immunity under international law, the Japanese government has taken the position that the lawsuit is not legitimate and refuses to become involved in the court battle.

The concept of sovereign immunity means that a state falls beyond the jurisdiction of the court of a foreign country.

Tokyo has also made it clear it is not liable to compensate the plaintiffs.

The deadline for submitting the list of assets was not provided. It will only be set after the written order is delivered to the Japanese government through diplomatic authorities.

But Tokyo is expected to refuse to comply with the order.

The Japanese government argues that all claims related to World War II were settled by a 1965 bilateral agreement on the provision of financial aid to Seoul on the understanding that the issue of compensation was resolved “completely and finally.”

But the South Korean Supreme Court ruled in 2018 that Korean laborers mobilized to work at Japanese factories during the war are eligible to claim damages, ruling that their claims are not covered by the agreement.

The lower court also said the principle of state immunity cannot be applied to a “case of serious breaches of human rights” and that it is not the responsibility of a court to consider ramifications for Japan-South Korea relations resulting from the seizure of assets.

A different judge with the same court had dismissed plaintiffs’ asset-seizure request, saying that denying Japan’s sovereign immunity could violate international law. As a result, many observers watching the lawsuit believed that the district court would be unlikely to approve the asset seizure aimed at paying the plaintiffs’ legal fees.