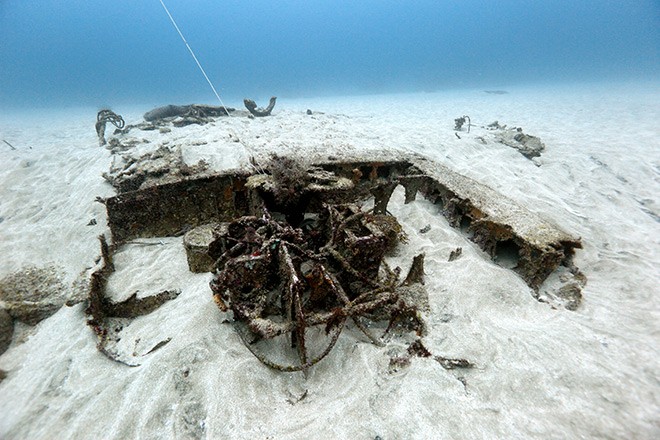 The wreckage believed to be an aircraft used by the Imperial Japanese Navy lies off the coast of Tanegashima island in Kagoshima Prefecture on May 19. (Provided by Hiroyuki Tomura)

NISHINOOMOTE, Kagoshima Prefecture--The central government on June 15 started a search for human remains among the wreckage of a sunken aircraft believed to be a Japanese warplane in the waters off the southern coast of Kyushu.

According to the welfare ministry, which is in charge of collecting the remains of Japan's war dead, it has retrieved crew remains from sunken warships in the past, but this is the first time that the mission involves a sunken aircraft likely used by the Imperial Japanese Navy.

Tetsuro Hayashi, 74, a local dive shop operator who discovered the wreck, is accompanying the search team.

“I hope the remains will be recovered and brought back to their hometowns as soon as possible,” Hayashi said.

The wreckage rests at a depth of about 20 meters, located roughly 300 meters off the northern tip of Tanegashima island.

The aircraft appears to be a Type 97 carrier-based attack bomber used by the Imperial Japanese Navy, according to the ministry. The three-seater aircraft is believed to have been used in Japan's 1941 attack on Pearl Harbor and kamikaze attacks during the waning days of the Pacific War.

In 2015, local divers discovered part of the plane wreckage off the coast of Tanegashima island after learning from local fishermen that an aircraft was likely resting there.

They repeatedly dived at the site to dig into the sand around the wreck, and spotted an item that appears to be a wing of the aircraft.

The ministry decided that a search is merited to locate the remains of the plane’s crew, based on the results of its on-site inspections. The mission started in June as planned since tides are relatively calm.

The search is being conducted mainly by the Japan Association for Recovery and Repatriation of War Casualties, which is commissioned by the government to collect the remains of the nation’s war dead.

The ministry also dispatched its own officials and experts who specialize in analyzing remains.

The team will look for the remains of the crew and their personal belongings by digging in the seabed by hand, as most parts of the aircraft remain buried under the sand. It will also dig out the wreckage.

Divers explored the site on June 15, but strong tides forced them to suspend their search immediately after it began. They will resume their work on June 16 or later, while paying attention to any potentially hazardous objects under the sea.

“We can spend only 20 minutes or so exploring the area in each dive due to strong tides,” said Fumiaki Nayuki, who heads the team. “We’ll do our best to locate the remains.”

The recovery operation is scheduled to continue until around June 23.