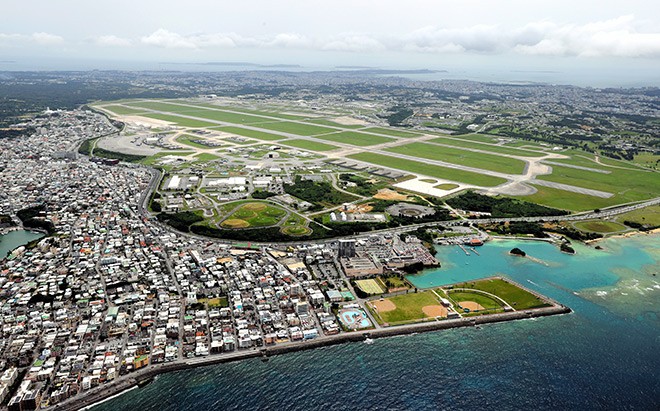 Fear that foreign individuals and companies could buy up land around Self-Defense Forces' and other important facilities, posing a security threat, justifies a law to control who can purchase such property, government officials have insisted.

But a Defense Ministry study conducted over an eight-year period found that there appeared to be only seven plots adjacent to such facilities that were in possession of foreigners.

The study covered about 630 SDF-related facilities around the nation as well as about 20 used by the U.S. military as bases or communication posts. The study found about 60,000 plots of land adjacent to those facilities and about 78,920 owners.

That led to the seven plots of land. Five were next to SDF facilities in the 23 wards of Tokyo, with another adjacent to a SDF facility in Kyoto. The last plot was next to a U.S. military facility in Kanagawa Prefecture.

The Defense Ministry did not reveal the actual sites or the number of owners of the seven plots.

But the small number led one Upper House member to question whether the land use law was needed.

“Only seven plots of land out of about 60,000. I hold grave doubts over whether there is a valid reason to conduct a study (on such a small number),” said Yoichi Iha, a member of the Okinawa Whirlwind caucus in the Upper House, at an April 15 session of the Foreign Affairs and Defense Committee.

The framework for the legislation was based on recommendations by a panel of experts looking into the use of land.

One of its findings was that land in the vicinity of the Air SDF Chitose Air Base in Hokkaido as well as the Maritime SDF Tsushima coastal defense group in Nagasaki Prefecture was being bought up by foreign capital.

Those moves led to spreading concern among the public over a possible national security risk, the panel said.

But the Defense Ministry conducted its study in two rounds, with one from 2013 until 2017 and the second from 2017 until 2020. Those studies could not find any evidence of land adjacent to the Chitose and Tsushima facilities in foreign hands.

But the study was only of plots of land right next to the military facilities and not of all plots in the nearby vicinity. Even the areas covered in the study merely confirmed the owner as listed on the land register.

That led Takaki Kawashima, a high-ranking Defense Ministry official, to point out at an Upper House Foreign Affairs and Defense Committee session on June 3 that any study by the ministry was severely restricted and additional legislation was needed to allow for a more thorough study.

At the same committee session, Defense Minister Nobuo Kishi said the bill had to be passed to allow for proper functioning of SDF facilities.

The law also has provisions to penalize landowners who interfere with activities at an adjacent facility. Government officials gave interfering with radio wave transmissions out of the facility as one example.

But Hideki Tsuchimoto, the director-general of the Bureau of Defense Buildup Planning at the Defense Ministry, said at the Upper House Foreign Affairs and Defense Committee that not a single case of a landowner of a plot next to military facilities had been found interfering with radio wave transmissions used by the SDF or U.S. military.

The wording of the law allows for cracking down if there appears to be a clear danger of interference with activities.

But speaking as a witness at the Upper House Cabinet Committee on June 14, lawyer Izutaro Managi said, “Even as it has become clear that there have been no clear interference in operations (at the bases), the legislation will allow for a considerable level of restriction of rights and regulation based only on abstract dangers. There is no balance with the level of risk said to exist.”