The pandemic is making school life a lot harder for children 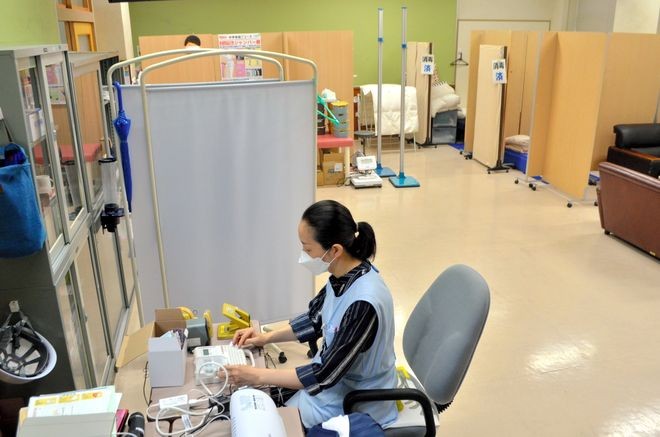 The nurse’s office at a junior high school in Tokyo sees a daily surge of students complaining of illnesses like stomachaches due to the stress caused by the ongoing pandemic. (Yukihito Takahama)

More than a year of the pandemic upending students’ lives has led to reports of an increasing number frequently visiting school nurse’s offices, skipping classes and generally struggling to adapt to their situations.

Education facilities imposed strict behavioral restrictions in efforts to contain the pandemic, piling extra stress onto students at elementary and junior high schools who are finding it difficult to share their troubles with adults, according to new data.

School nurses, who witness firsthand the effect the pandemic is having on students every day, are feeling a growing sense of crisis about the increasing number of kids unable to cope with the change.

“I am surprised at the continuous stream of students coming to the nurse’s office,” said a school nurse at a public junior high school in the Kanto region around Tokyo.

The nurse said that every day following the May holiday period, a succession of no fewer than 10 students stopped by their office once morning classes began.

The students usually complain they are “feeling sick” and have stomachaches.

The academy has fewer than 300 students, but nearly 20 of them--including some who had refused to go to school before the pandemic--are routinely late for class, go home early, and are absent from school for prolonged periods.

“The number is larger than usual,” the school nurse said.

One student said he did not sleep at all on one school night because he stayed up and “played a video game until morning.”

This is just one of many cases of students struggling with being banned from going out and finding themselves increasingly immersed in online environments and video games.

“The extension of life with the coronavirus has had an impact on children’s bodies and minds,” said the school nurse.

One publicly run elementary school in Tokyo with almost 500 students said nearly 20 children have been unable to leave the nurse’s office, or often do not appear at class.

Under normal circumstances, only a few students a year show these troubling signs.

The 30-year-old nurse there said the “influence of last year’s nationwide school closure remains,” and noted that educators were unable to determine how their students’ lives and behavior had changed over that period, even though they phoned their homes.

It became impossible for the school to respond quickly to family rifts and students’ deteriorating mental health, resulting in some cases of refusing to attend school, according to educators.

As all school trips and other events were canceled last year, students were deprived of opportunities to improve their psychological states and human relationships.

“Teachers also lost chances to effectively reach out to children,” said the school nurse. “If this continues, it would be no wonder if people consider school to be an unattractive place to go to.”

A teacher at a ward-run junior high school in Tokyo in his 50s said that more children are eating poorly now. Several children in each class ask teachers to reduce the volume of their school lunch and return part of the served meals.

He is also concerned about the fact that an increasing number of students are being absent from school about once a week or so, citing reasons such as headaches and feeling ill.

Each situation is different depending on the school and region.

The school nurse at a public junior high in Saitama Prefecture argued that “fewer students than previously reported are becoming sick now, thanks to the thorough surgical mask use and hand washing practice.”

Megumi Tsukakoshi, 49, a school nurse at the junior high school affiliated with a state-run college in the capital, said the physical and mental toll that the prolonged health crisis is exacting on children “will start to fully surface.”

Reports of struggling students unwilling to attend class or skipping school tend to crop up more at the junior high level after the end of the summer vacation period. But this year, those instances have been on the rise since the May holiday period.

“There are fewer opportunities to engage students in a way that is stimulating under the various restrictions, sapping students’ mental energy,” Tsukakoshi said.

According to Tsukakoshi, maladjusted kids often suffer from a lack of emotional energy, and adults remaining unaware of their problems could lead to serious adverse outcomes, including suicides.

“Maladjustment is an important sign,” Tsukakoshi warned. “It is essential for us to allocate more time to listen to each child’s problems in person.”

Troubling statistics suggest the burden the pandemic is placing on students is getting worse.

Hideyuki Tobe, a professor of school health studies at Saitama University, conducted a survey between March and early May this year of 500 school nurses across Japan.

More than half said that “more children are failing to adapt to school life, such as by refusing to go to school, frequenting nurses’ offices or feeling reluctant to attend class,” at 54 percent. The ratio in the same survey in July-September last year was 43 percent.

Respondents could choose more than one answer.

Those who reported “signs of excessive use of video games and the internet” among students accounted for 76 percent--around the same level as in the previous study.

According to the survey team, children are “shying away from personal contact while they are wearing masks, rendering it difficult to build strong friendships with others.” As events are also called off, students “cannot find something to pour their passions into.”

The team concluded that the “continuation of such school days are behind the issue.”

The National Center for Child Health and Development carried out a survey from February through March that asked 501 elementary, junior high and senior high school students about the emotional and mental strain caused by the pandemic.

All those figures increased from the previous study held between September and October last year, in which the rates of students who reported injuries, irritation and being unable to concentrate were 7 percent, 30 percent, and 26 percent, respectively.

Respondents who said “it has become more difficult to talk to or consult with teachers and other adults” over the last year reached 51 percent.

Mayumi Hangai, a pediatrician who was involved in the survey, said children are resorting to abusive behavior because they do not have an outlet for their emotions under the strenuous circumstances.

“Being stuck at home, children feel stress and cannot find ways to relieve it,” said Hangai. “What is significant is discussing how to address the issue together, such as preparing opportunities to listen to children’s opinions over the cancellation of club activities and school events.”

(This article was written by Yukihito Takahama and Azusa Mishima.)