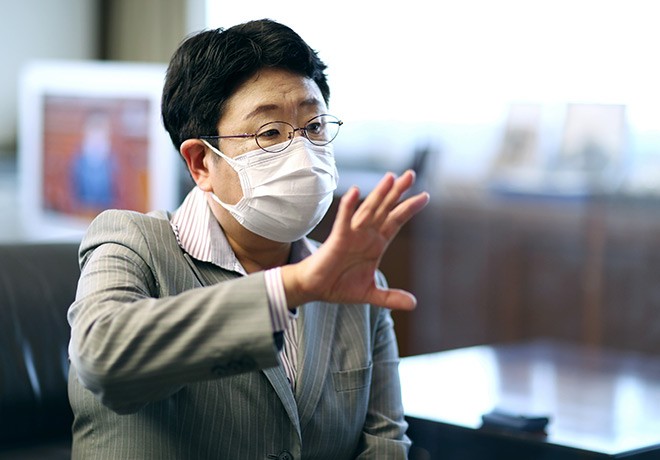 Shoko Sasaki, commissioner of the Immigration Services Agency, during an interview on June 15 (Rei Kishitsu)

The Immigration Services Agency chief pledged to scrap Japan’s longstanding policy of detaining all foreigners who lack resident status, noting the criticism that erupted over the death of a Sri Lankan woman under detention.

“I am determined, with unflagging resolve, to put an end to the policy,” Shoko Sasaki, commissioner of the agency, said in an interview with The Asahi Shimbun.

She also promised to work on measures to prevent long-term detentions of foreign nationals, hinting at the introduction of a system in which the commissioner will personally look into whether continued detention of each individual is warranted.

“I will ensure an examination of each case on whether keeping the person detained is necessary, considering the individual circumstances,” Sasaki said.

The interview was held on June 15, ahead of the U.N.-designated World Refugee Day on June 20.

Japan’s immigration system has long been criticized for the prolonged detentions of undocumented foreign nationals, including those waiting for decisions on their applications for refugee status.

But the criticism turned into an uproar after the Sri Lankan woman, Wishma Sandamali, died in March at an immigration facility in Nagoya.

The 33-year-old, who was sent to the facility in August for overstaying her visa, developed nausea this year, and her health rapidly deteriorated.

Her supporters said she died after her repeated requests for proper medical care were denied.

“It is extremely regrettable that a person’s life was lost,” Sasaki said. “We will do soul searching where we need to and start with what we can to implement an immigration policy that fits with the times.”

Japan granted asylum and similar protections provided to refugees to 91 people in 2020, a figure dwarfed by the United States and European countries.

Sasaki underscored the need for Japan to clearly spell out the criteria for granting refugee status based on the U.N. Convention on Refugees and enlisting cooperation from the United Nations High Commissioner for Refugees.

She also noted the importance of immigration officials grasping a fuller picture of the situation surrounding the applicants, including the state of politics in their home countries.

She said officials should improve their interviewing skills to gain detailed information from the applicants on what really happened back home. Such details can help to verify their accounts before a decision is made on their legal status in Japan.

A bill to revise the immigration control law was debated in the current Diet session, but the government and ruling coalition abandoned the legislation after many points in it were challenged, including a stipulation limiting the number of times a person can apply for asylum.

The bill also included a clause that would allow foreigners with visa problems to stay outside a detention facility under the oversight of a “supervisor.”

The Japan Federation of Bar Associations issued a statement against the proposed setup, noting that those supervisors would have to gain approval from immigration authorities to take the position.

But Sasaki defended the proposal.

“I am aware that critics are saying immigration authorities are trying to use supervisors as pawns,” she said. “But it is an arrangement in which foreign nationals are permitted to stay outside detention facilities with their supporters’ assistance, on the condition that immigration officials can contact them when the need arises.”

Sasaki said more details of the supervision system need to be worked out.

But if it works, the number of foreigners detained at immigration facilities would drop and their periods of detention would become shorter, she said.

“Even if zero detentions cannot be achieved, we will also press for measures to protect their lives and their health to gain an understanding from the public,” Sasaki said.