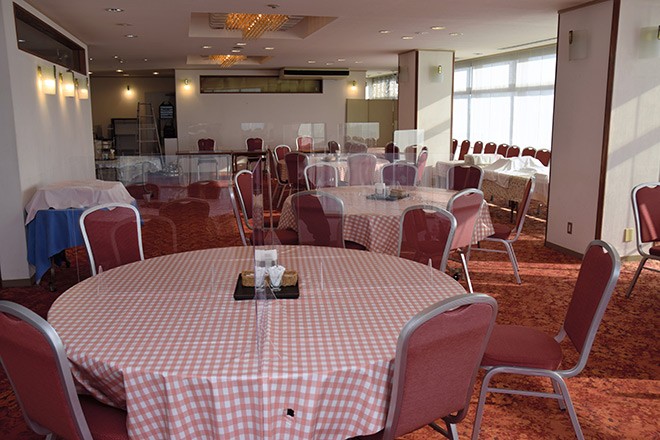 In this banquet hall planned as a dining area for athletes from Uganda while they stay in Izumisano, Osaka Prefecture, tables are spaced apart for social distancing and have been outfitted with acrylic panels as precautions against the novel coronavirus on June 9. (Takuya Nishie)

IZUMISANO, Osaka Prefecture--Uganda’s team for the Tokyo Olympics and Paralympics was supposed to have landed in Japan on June 16, but its flight was canceled following a surge in COVID-19 cases in its home country.

Their host city, Izumisano, remains in the dark about when they might arrive now due to difficulty communicating across time zones.

“We can’t do anything about it,” Izumisano Mayor Hiroyasu Chiyomatsu told reporters on June 15. “We hope the team can come here as quickly as possible to train hard for the Games. We’d like to play a role as a host city.”

City officials said the Ugandan side initially told them the athletes would arrive at Kansai Airport in Izumisano via Dubai on June 16 for a pre-Olympic training camp scheduled to start this month.

But there was no direct flight available on June 16 from Dubai to Kansai Airport when city officials checked, prompting them to contact the Ugandans to confirm the travel plan.

The Ugandans replied that a flight to Dubai that the athletes were supposed to board under the original plan was canceled due to a spike in novel coronavirus infections in their country, leaving them waylaid, according to the city officials. The team is currently looking for another route.

The officials said they mainly use email to communicate with the Ugandans because of the time difference, and that all they can do is wait for a reply.

Izumisano is the second host city following Ota, Gunma Prefecture, to accept athletes from abroad ahead of the Olympics since the Games were postponed by a year, according to the Cabinet Secretariat.

Ota is hosting a pre-Olympic training camp for the Australian women's softball team.