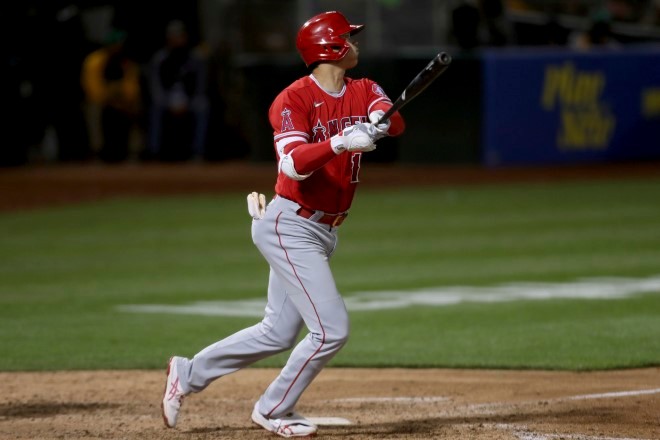 OAKLAND, Calif.--Frankie Montas induced Shohei Ohtani’s inning-ending double play in the third, then struck out the two-way star with three splitters low in the zone to finish the fifth.

Sure, Ohtani hit his 18th homer late--but he did minimal damage at the plate overall, and that’s certainly a mark of success for any Angels opponent.

Sean Murphy homered for the second consecutive night, Elvis Andrus hit a two-run double and Montas pitched the Oakland Athletics past Los Angeles 6-4 on Tuesday for their fifth straight win.

Montas enjoyed those battles with Ohtani, even though there was some added anxiety with runners on base.

“He was probably expecting fastballs,” Montas said of the strikeout. “He was swinging. He was trying to drive in a run.”

Montas (7-6) struck out eight with one walk over seven innings to win for the second time in six starts. He allowed two runs and five hits, including RBI singles by Justin Upton and David Fletcher.

“There’s no give up in Frankie,” second baseman Tony Kemp said. “It’s a blessing to play behind him.”

Ohtani homered with two outs in the eighth for the Angels. He is 2 for 9 in the series.

Pinch-hitter Seth Brown delivered a go-ahead sacrifice fly in the sixth and Andrus followed with his double to make it 5-2.

Yusmeiro Petit gave up a leadoff homer to Jared Walsh in the ninth but finished for his second save.

“As an industry and moving forward and really trying to create the best version of our game that we can to make it interesting for us and for kids that may want to play in the future, I think it’s the right thing to do,” Maddon said. “It is really an unfair advantage. And that unfair advantage can also be defined in regard to games with greater resources possibly. I’m not talking about getting better sticky stuff, I’m talking about getting better players that then utilize enhancements like this that make them even better.”

Maddon insists he isn’t trying to offend anyone with the Angels or in baseball.

“I’m all about this game being resurrected and putting it back on the pedestal it deserves,” he said. “It still is the best game, but it’s not recognized that way. It’s not spoken about as the national pastime anymore, and that bothers me. I think all these little bumps in the road, all these glitches, interfere with that.”

Bob Melvin, the winningest manager in Oakland history, is staying put through at least next season after the club exercised his contract option for 2022.

Melvin has guided the A’s to an 809-715 record since taking over on June 9, 2011. He recently passed Tony La Russa for most victories by an Oakland manager and last weekend became the 35th person in major league history with 1,300 managerial wins.