EDITORIAL: Ruling camp’s refusal to extend session a slap in the face to Diet 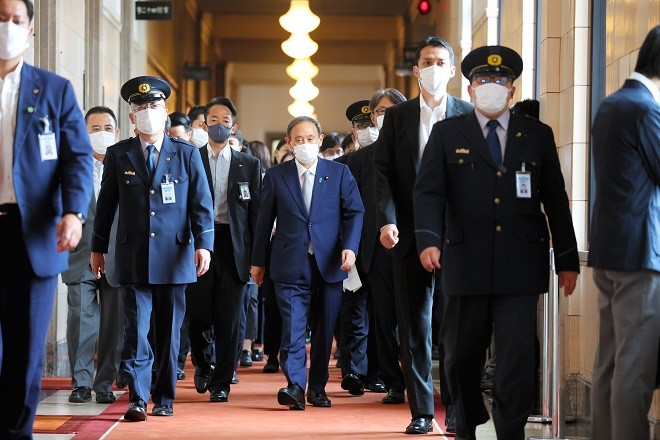 Prime Minister Yoshihide Suga, center, walks through the Diet building to meet with party leaders on June 16, the last day of the regular session. (Koichi Ueda)

The ruling coalition has refused to extend the Diet session despite the serious threat posed by the new coronavirus pandemic to the people’s lives and livelihoods, a crisis that requires flexible and timely policy responses.

The ruling camp apparently plans to make important policy decisions during the recess. This is another troubling sign that Prime Minister Yoshihide Suga’s administration does not have the steadfast political commitment required to govern the nation.

The first regular Diet session since Suga came into office in September last year ended on June 16. Opposition parties demanded a major extension of the session, citing the need for Diet debate on policy responses to the health crisis, only to find the ruling coalition, led by the Liberal Democratic Party, had no interest in such a debate.

In May 2011, when the LDP was in opposition, Suga, in his blog post, said adjourning the Diet while the nation was dealing with the aftermath of the disastrous earthquake and tsunami would be “out of the question.”

At that time, Suga led a political campaign urging then Prime Minister Naoto Kan to extend the Diet session. His current stance is total inconsistent with what he said back then.

The state of emergency in place for 10 prefectures is set to be lifted on June 20 at the end of the term, at least for most of the regions.

The Tokyo Olympics and Paralympics are scheduled to start in less than 40 days. Policy decisions concerning issues related to these matters, which are bound to have significant effects on the daily lives of people, are to be made while the Diet is out of session.

That means the Diet members, representatives of the people, will have no opportunity to ask the government questions about related issues to hold it accountable for its decisions.

The Suga administration has apparently inherited the bad habit of evading Diet debate as much as possible and disregarding the importance of the role of the legislature from the previous administration of former Prime Minister Shinzo Abe, who was Suga’s boss.

The administration has been obsessed with dodging the opposition's attempts to question its policy decisions and avoiding being forced to make any commitment while showing no signs of trying to ensure that the public will understand and trust its policies.

Symptomatic of this tendency has been Suga’s answers to questions about whether the Summer Olympics should be held. He has only repeated saying the government will “protect the people’s lives and health.”

During the Diet session, three lawmakers who belonged to the LDP resigned from the Diet over corruption allegations. Lower House member Tsukasa Akimoto, a former senior vice minister in the Cabinet Office, is being tried on  charges of bribe-taking and witness tampering in a scandal linked to casino development plans.

Senior officials of the telecommunications and farm ministries were disciplined for violations of the ethical code of conduct for government employees after their cozy relationships with businesses in the industries they regulate came to light.

Despite the flurry of scandals that has undermined public trust in politics and government, the administration has failed to make any serious effort to uncover the truth, clarify responsibility or prevent similar scandals in the future.

No progress has been made, either, in the pursuit of facts related to three political scandals that broke out during the Abe administration--the ones concerning Moritomo Gakuen and the Kake Educational Institution, two school operators linked directly or indirectly to Abe, and annual tax-financed cherry blossom viewing parties hosted by the prime minister.

Abe seems to be plotting a comeback, making such moves as becoming the top advisor for multiple associations of LDP legislators. But he has yet to offer convincing explanations about various allegations against him, including the charge that he gave false answers to questions concerning certain scandals at the Diet.

All these suspicions need to be investigated thoroughly to restore the Diet's ability to monitor and check what the government is doing.

The Diet has an important role to play in holding the government and the LDP fully accountable for issues raised by these and other scandals including allegations that Toshiba Corp.’s management and the industry ministry colluded to apply undue pressure on foreign investors at the company’s shareholders meeting.

The government and the ruling party should grant any opposition request for a special Diet session while the assembly as a whole is in recess.

The ruling camp should also be ready to convene an extraordinary Diet session at any time to ensure there will be no delays in necessary policy responses to the pandemic.