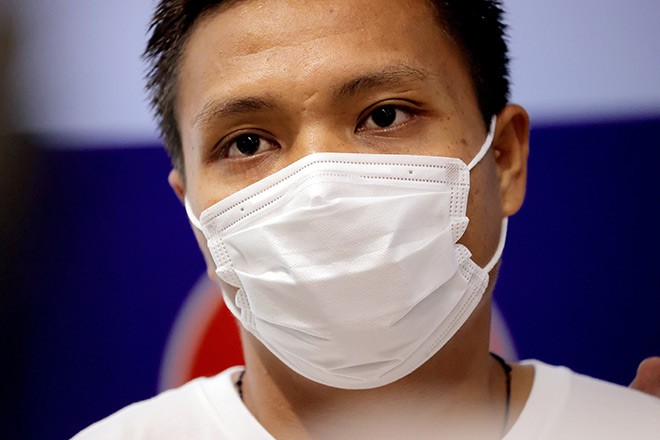 A goalkeeper for Myanmar’s national soccer team is refusing to return home and seeking asylum with the help of Japanese supporters after he protested the military coup during a 2022 World Cup qualifying match.

Substitute goalie Pyae Lyan Aung, 27, refused to board a plane home on June 16 with his team at Kansai International Airport, asking for protection from the Japanese government.

“If I return to (Myanmar), my life and safety will be in immediate danger. That is why I have decided to stay in Japan,” he told reporters shortly after midnight on June 17, after he escaped from boarding his flight at the last moment and joined up with supporters and lawyers.

“I think the Japanese people and government know the situation in Myanmar. I want them to continue to understand and help Myanmar.”

At the match against Japan held in Chiba on May 28, Pyae Lyan Aung made a three-finger salute, a gesture of resistance against the military coup and oppression in his home country, during the national anthem.

In early June, Pyae Lyan Aung told The Asahi Shimbun that he made the gesture because he “wanted the world to know about the destabilized situation in Myanmar.”

He is expected to apply for refugee status soon.

The Justice Ministry’s Immigration Services Agency of Japan on May 28 implemented an emergency measure to allow Myanmar nationals who live in Japan and wish to stay here because of the unstable situation caused by the coup to remain and work in Japan.

Under the measure, people whose residency status expires because their employment contract expires or they graduate from school will be allowed to stay and work in Japan for either six months or a year, the agency said.

As of June 11, the agency has allowed about 20 such cases.

Pyae Lyan Aung appears to be a good candidate for the measure.

In late April, the Myanmar soccer federation had called for players to step up for joint practice sessions to prepare for the match against Japan. But about 10 players refused to join the national team, protesting the coup.

The federation issued a warning that if a player dodges the call to play on the national team, they will be suspended for later games.

Still, it was difficult for the federation to secure enough players to make the team, and their departure for Japan was delayed for five days.

Pyae Lyan Aung’s escape was planned by supporters in Japan.

Among those who saw Pyae Lyan Aung make the gesture, a 47-year-old Myanmar national who runs a restaurant in Osaka immediately thought after seeing it, “His life will be in danger once he returns home.”

The restaurant operator was involved in the 1988 pro-democracy movement in Myanmar, came to Japan in 1998 and obtained refugee status in 2004.

They secretly communicated with Pyae Lyan Aung and prepared to help him stay in Japan.

They initially planned to have him escape from the team on the evening of June 15, after the match against Tajikistan.

Two buses carrying the players arrived at a hotel in Osaka’s Suminoe Ward from the stadium at around 10:15 p.m.

The restaurant operator waited inside a car in the parking lot. Pyae Lyan Aung was supposed to sneak out during dinner, but because of the strict supervision by the team’s staff, the plan failed.

Yoshihiro Sorano, a lawyer specializing in refugee law, joined the effort at around 1 a.m. on June 16.

They told Pyae Lyan Aung during a video call, “We will get you out at any cost.”

Sorano learned that Pyae Lyan Aung tried to sneak out of the hotel, but the team staff took him by his arms and brought him back to his hotel room and locked him in.

Sorano then went to Osaka prefectural police headquarters and submitted a criminal complaint against the staff for confinement.

Sorano and some others then spoke with Pyae Lyan Aung. An Asahi Shimbun reporter witnessed the conversation.

Pyae Lyan Aung said he wants to stay in Japan and expressed concerns that his family in Myanmar could suffer repercussions for his actions.

He also revealed that an official of the Myanmar soccer federation had called him and said, “Please come home. Why are you trying to run away?”

He said the official guaranteed his safety after his return.

“I am still thinking about if I should go back or not,” he said, tearing up.

At around 7 p.m. on June 16, Pyae Lyan Aung once again tried to flee from the hotel during a team dinner. But he could not break away then, either.

Around 8 p.m., he boarded a bus with his teammates and headed to the airport.

After 9:20 p.m., they entered the departure gate for international flights. According to his supporters, only Pyae Lyan Aung was led to a different room by an official. There, he asked for protection from the Japanese government.

About 10 minutes after midnight, he was joined by supporters in the airport lobby, who were surrounded by reporters.

“Good. I am happy,” the restaurant operator repeatedly said in relief.

(This article was compiled from reports written by Aki Fukuyama, a correspondent, Ryo Miyazaki and Shin Kasahara.)