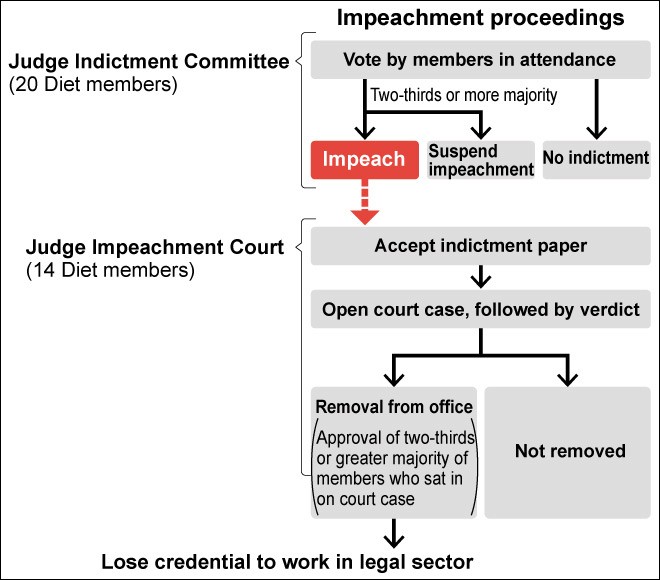 A Diet panel impeached a high court judge on June 16 for making a series of inappropriate social media posts.

A lawyer for Kiichi Okaguchi, 55, now a judge with the Sendai High Court, immediately issued a statement that said the jurist never committed any act that warranted his removal from the bench.

The statement criticized the impeachment as a “grave threat to the independence of a judge as well as the freedom of expression and other human rights of a judge.”

Okaguchi is Japan's ninth judge to be impeached. Seven of the eight jurists impeached before him were removed from their posts.

But those removed were found to have abused their judicial post to commit illegal acts or were found guilty in criminal cases.

The only problem found regarding Okaguchi was the often controversial posts he has made on social media. Those posts led to a total of 12 requests that Okaguchi be impeached.

Yoshitaka Shindo, the chairman of the Judge Indictment Committee, did not divulge the specific cases that led to the impeachment, pointing out that the committee does not disclose its minutes to the public.

Okaguchi has posted messages under his name that have often taken the side of those in a weak position in society, such as sexual minorities or victims of hate speech.

But he has also been disciplined by the courts for a number of posts in the past, including one in December 2017 regarding a female senior high school student who was murdered and another in May 2018 when he posted a message related to ownership of a pet dog.

In November 2019, Okaguchi was cautioned for a message directed at a murder victim's bereaved family members, who then filed a request to have him impeached, saying they were deeply hurt by his messages.

Unlike the Judge Indictment Committee, the Judge Impeachment Court will be open to the public and 14 Diet members will hear the case. A two-thirds majority of those members will be required to remove Okaguchi from his post.

Okaguchi would have no avenue for appeal if he is removed from the bench, and he will automatically lose his certification to work in the legal sector.

The Judge Impeachment Court is expected to be convened in a few months.

One expert had doubts about the impeachment case against Okaguchi.

“An impeachment based on personal statements expects judges to have an excessive awareness of the need for restraint,” said Kenichi Baba, a professor of sociology of the law at Kobe University.

He added that Diet members should recognize that such acts could lead to more jurists being extremely cautious about what they say as private individuals.

But one veteran judge said, “The statements of a judge with legal knowledge are highly persuasive. I believe all judges should only make statements while being aware of their position. As a fellow judge, I feel regret.”