Iwate Prefecture says thank you as Olympic flame passes through 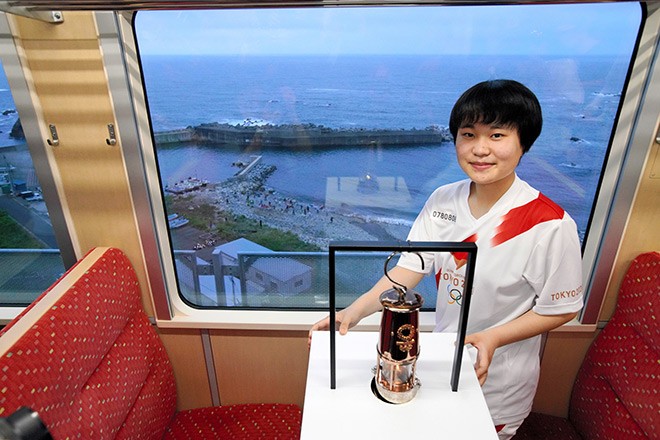 The Olympic flame is carried to the next relay stretch on a Sanriku Railway Co. train. The photo was taken in Fudai, Iwate Prefecture, on June 16. (Shigetaka Kodama)

MORIOKA--Ten years after the Great East Japan Earthquake and tsunami, Iwate Prefecture residents used the Olympic torch relay to send a message of thanks to the world for their assistance.

On June 16, the relay started from the inland Shizukuishi town on the three-day route through the prefecture.

At the coastal Fudai village, Emi Kaneko, 15, a local high school freshman, transferred the flame from the Olympic torch to a lantern. She then carried the lantern aboard a train on the Sanriku Railway Rias Line, a symbol of restoration.

When the train passed through Horinai Station, local residents raised a banner on the platform showing their appreciation for the assistance that came from around the world following the March 11, 2011, disasters.

The banner read: “Thank you for your assistance and cooperation for our restoration (after the disaster).”

The train driver was Tomomi Yamazaki, 56. He was hired by Sanriku Railway Co. in 1983, a year before the opening of the train line, and was the stationmaster of Miyako Station at the time of the 2011 disasters.

After the Olympic flame was carried out of the train, he said, “Sanriku Railway has continued running after overcoming a series of disasters, which must have encouraged the people around the world who have been watching it."

A total of 286 people are scheduled to run as torchbearers through the prefecture.

On June 17, some of them will run in the coastal areas hit hard by the 2011 tsunami and bring the Olympic flame to Rikuzentakata city where Takatamatsubara Memorial Park is located.