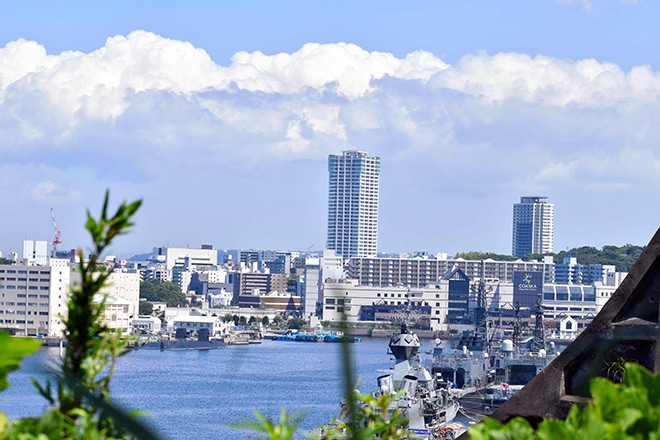 A residential area is located right next to U.S. Navy’s Yokosuka Base in Kanagawa Prefecture. (Masato Tainaka)

Activists fear that the new law allowing the government to gather information on residents living near U.S. military and Self-Defense Forces bases in Japan might ramp up surveillance on them to deter protests.

The law designed to regulate use of land in the vicinity of important facilities in light of national security was enacted on June 16.

The law's failure to clearly state exactly which facilities are targeted under it is one of two key points opponents of it have slammed.

Plots of land within 1 kilometer of facilities of the U.S. military, the SDF, the Japan Coast Guard, as well as outlying islands near the national border, are designated for "observation" under the legislation.

Though the government also envisages land in the vicinity of nuclear power plants and commercial service airports that are also used by the SDF as targets for observation, they were not spelled out in the law.

As a result, the legislation has confused many residents, who are unsure how to react to it.

A member of the Kashiwa village assembly in Niigata Prefecture who has been involved in anti-nuclear power activities said it is difficult to determine what implications the law has for the village, which co-hosts Tokyo Electric Power Co.’s Kashiwazaki-Kariwa nuclear power plant.

“The law was enacted even as we were still unable to fathom what it would mean for us,” the assembly member said. “We need more information.”

It is likely to affect the lives of many residents there as numerous houses, offices and a large supermarket are located in close proximity to the nuclear plant.

In Misawa, Aomori Prefecture, where the U.S. military’s Misawa Air Base is located, which is also used by the SDF, large numbers of residents did not seem to view the legislation as something that would directly impact them.

“I didn't know such a law was passed,” said a woman in her 60s, who was out shopping.

The lack of the awareness of the law was not limited to residents.

Many local assembly members were not aware of the detrimental aspect of the law despite the presence of an SDF base in Matsudo, Chiba Prefecture, lamented Yuko Okamoto, a member of the Matsudo municipal assembly.

At a protest rally in Tokyo on June 16, Okamoto called the law’s passage “outrageous.”

The other point critics of the legislation have seized upon is the vague wording on the extent of possible checks by government officials on residents in the observation areas.

A Cabinet order is expected in the future specifying the range of checks, in addition to the names and addresses of residents in the observation areas.

Tomoko Tsutsumi, 74, a Sendai resident in Miyagi Prefecture, said she was worried that the law would lead to increased government surveillance on the general population.

Around 2014, an SDF intelligence unit collected data on people who attended gatherings opposing the deployment of the SDF to Iraq, including the names of participants in protests and their occupations, which had been kept secret.

Information on a rally Tsutsumi organized was among the data the unit collected.

“I found that terrifying and creepy,” she said.

Under the law, the government can issue orders to stop residents living near important facilities who it deems are on the verge of engaging in actions that would obstruct the facilities.

“But issuing orders will be only possible after they dig into residents’ thoughts and beliefs,” she said. “It's so obvious that government officials will spiral out of control.”

Criminal penalties will be imposed if the orders are not obeyed.

Two local daily newspapers in Okinawa Prefecture, home to about 70 percent of U.S. bases in Japan, ran editorials expressing grave concerns about the legislation on June 16.

The bill was initially drafted to address perceived national security threats from foreigners purchasing land close to such facilities.

But it did not restrict foreign ownership of land in those locations.

“The legislation ended up being transformed into one allowing authorities to keep close tabs on residents living near military bases,” said The Ryukyu Shimpo, one of the newspapers.

Citizens' protests near the U.S. military’s Camp Schwab against construction of a base in the Henoko district of Nago to take over the functions of the U.S. Marine Corps Air Station Futenma in Ginowan, both in Okinawa Prefecture, could be deemed obstructive behavior, the daily said.