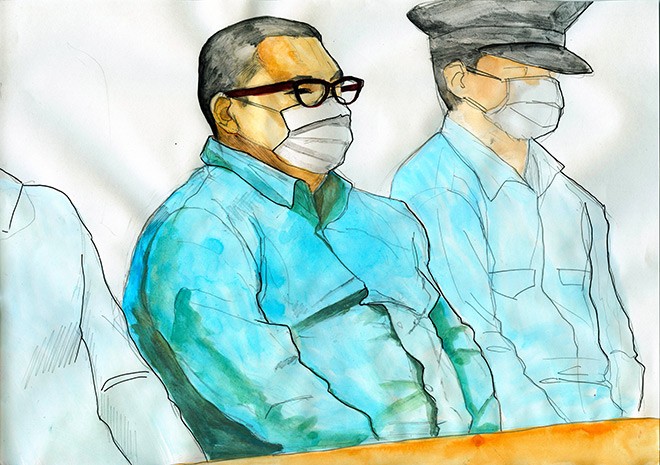 MITO, Ibaraki Prefecture--Prosecutors demanded the death penalty on June 17 for a man suspected of brutally killing his wife and five children.

Hirobumi Komatsu, 36, “took away lives in an extremely cruel way,” prosecutors said in front of lay judges at the Mito District Court.

According to the document of charges, Komatsu stabbed his wife and five children between the ages of 3 and 11 in their backs and chests with a knife on Oct. 6, 2017, at his home in Hitachi, Ibaraki Prefecture.

He then doused gasoline on the door and over other areas of the residence, and killed them.

Prosecutors said Komatsu’s wife, 33, had broached the subject of divorce.

Komatsu killed them “for the selfish reason that he did not want to lose her to another man,” prosecutors said.

Komatsu has been accused of murder and arson, among other charges.

They said Komatsu lost a lot of sleep and could barely eat before the incident.

Komatsu’s cognitive process was impaired due to his suffering from depression and extreme tension, they argued.

The defense is seeking either a not-guilty verdict or a commutation.

Komatsu said during the trial that he lost memories as an aftereffect and repeatedly said, “I have no recollection.”

During the first hearing, defense lawyers asked the trial to be suspended because Komatsu is mentally incompetent.

But the court said Komatsu is capable of communicating “with proper assistance from lawyers and supervisory support from the court,” and continued the trial.

Based on the testimony of a psychiatrist and others, prosecutors argued it is “obvious that (Komatsu) did not have a psychotic disorder at the time of the incident.”

The sentence will be handed down on June 30.

(This article was written by Shun Hayashi, Keitaro Nishizaki and Ryoukei Ito.)