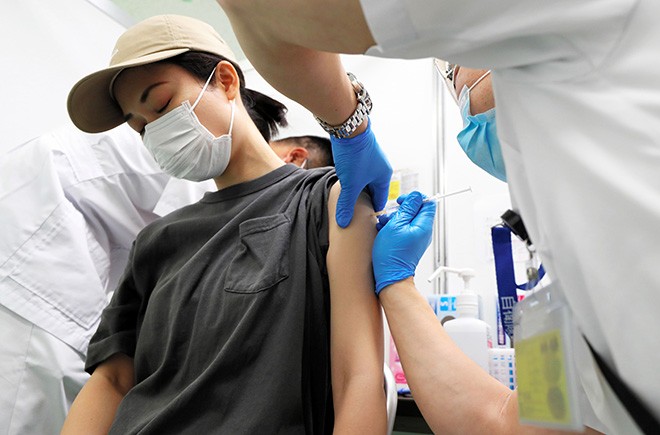 A woman receives a Moderna vaccine shot at the mass vaccination center operated by the Self-Defense Forces in Tokyo’s Chiyoda Ward. (Pool)

Instead of waiting until July to get her first shot, Rina Inoue took advantage of a mass vaccination center operated by the Self-Defense Forces in Tokyo on June 17 as the eligibility was expanded to include people 18 or older.

Inoue, 32, a company employee in Sumida Ward, who has been on child care leave, visited the site in Chiyoda Ward after leaving her child with her husband.

She received a vaccine voucher this month and her appointment with her ward was originally scheduled for July.

“I decided to get a shot here because I am worried about the safety of my child,” Inoue said. “I feel reassured as I can secure a second dose here.”

The expanded age range for inoculations started at the centers in Tokyo and Osaka on an appointment basis on June 17.

People are eligible to receive a shot at the locations if they present a vaccine voucher issued by their local government and if it is their first dose.

Another local resident who received a jab at the Tokyo location on June 17 was Yoshitaka Itoguchi, 39, a company employee in Sumida Ward.

“Being able to get a shot earlier than the ward's schedule is nice, and this site is not far from my home,” he said. “The procedure went smoothly, so I want to recommend vaccinations at this place to everybody.”

The SDF centers opened in May for people aged 65 or older in Tokyo, Saitama, Kanagawa, Chiba, Osaka, Hyogo and Kyoto prefectures.

The Defense Ministry expanded the eligibility to people under 65 after numerous slots remained vacant for seniors over two weeks until June 27.

The Moderna vaccine, which is recommended for those 18 years and older, is administered at the SDF mass vaccination centers.

If openings arise due to cancellations, they can be booked until 11:59 p.m. of the previous day of the vaccination day.