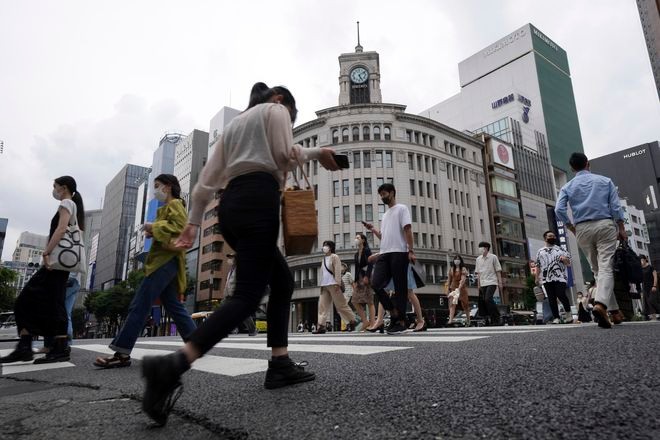 People wearing protective masks to help curb the spread of the novel coronavirus walk along a pedestrian crossing on June 16 in Tokyo's Ginza district. (AP Photo)

Tokyo confirmed 452 new COVID-19 cases on June 17, up 13 from a week earlier, according to metropolitan government officials.

The latest tally brought the daily average for the week in the capital through June 17 to 386.4 cases, or 98.6 percent of the figure for the preceding week. Since June 13, the average has been 90 percent or more of the previous week's level, and the week-on-week decline in new cases has become smaller.

Some members of the metropolitan government’s expert panel monitoring the spread of infections in Tokyo expressed strong concern at its meeting on June 17 that the average could soon exceed 100 percent, as the number of new cases has stopped declining.

The average number of diagnostic tests conducted in the capital over the three days through June 16 stood at 8,440.3.

Officials also reported seven new deaths from the coronavirus in Tokyo on June 17.

The number of serious cases in Tokyo requiring ventilators or extracorporeal membrane oxygenation, also known as an ECMO lung bypass machine, dropped by five from the previous day to 40 on June 17, the officials said.