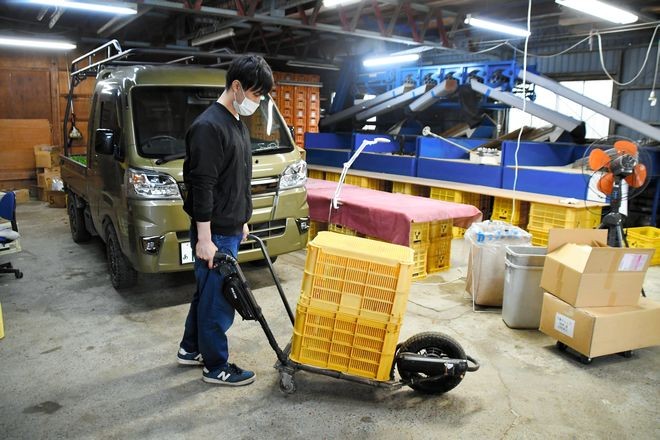 A mikan farmer handles a wheelbarrow with an E-Cat Kit on May 20 in Yuasa, Wakayama Prefecture. (Takahiro Takizawa)

YUASA, Wakayama Prefecture--As the aspiring robot designer slogged away loading mikan fruit into wheelbarrows, it occurred to him that surely there had to be a less exhausting way to do it.

“Transferring mikan was tough, and I remember thinking if I could do something to make the process easier,” says Mizuhito Terashima, founder of CuboRex, a Tokyo-based startup that has developed a system to electrify wheelbarrows for agricultural and engineering work. He hails from Yuasa, Wakayama Prefecture.

Mikan farmers in Wakayama and Ehime prefectures and other clients across Japan are embracing the E-Cat Kit, which can be used to modify various types of carts, to move loads more easily.

The E-Cat's system is comprised of a motor-mounted wheel and a controller to operate it.

The motorized wheel is designed to replace the existing counterparts on ordinary wheelbarrows. Almost all models of handcarts available in the market in Japan are compatible with it.

Terashima, 28, set up the CuboRex in 2016, a natural evolution perhaps for someone who since childhood had been engrossed in making things on his own, including a water gun, bow and arrow and other toys.

After entering the National Institute of Technology, Wakayama College, Terashima devoted himself to competing in the Robocon robot contest. He then studied at the Nagaoka University of Technology in Niigata Prefecture and set up his firm while a student there.

Masato Kakazu, 27, joined CuboRex in 2019, bringing his management engineering expertise to the company, following which CuboRex started the development of a wheelbarrow electrification system, inspired by Terashima’s experience of working part time harvesting fruit at a mikan farm in his junior high school and technical college days.

The drudgery of using wheelbarrows to lug picked mikan that have been put in baskets along mountain slopes to collection sites made Terashima certain that demand existed for electrifying the process.

Mikan producers are using a range of wheelbarrows, including ones exclusively developed by local firms.

CuboRex needed to make its product available for harvests of non-mikan crops as well.

“Designing the kit so that it could fit onto any sort of wheelbarrow was difficult,” Terashima says. “We bought wheelbarrows from across the nation to determine the conditions (that would allow the kit to be mounted on them).”

CuboRex completed the E-Cat Kit after spending around a year working on it, and it went on sale to the public in October 2020. The invention was featured in the Japan Agricultural Cooperatives’ bulletin, which helped gradually raise its profile nationwide.

As of May this year, the company has sold 150 E-Cat Kits in Wakayama and 100 outside the prefecture.

Most buyers in the prefecture have been mikan farmers, but producers of ume and other local specialties have reportedly bought ones as well.

Yuasa mikan farmer Shintaro Inoue, 29, was one of the first to buy an E-Cat Kit.

“Mikan fields are marked by steep slopes and you can't drive a car up there, so there's no choice but to use wheelbarrows for transport,” Inoue says. “We have to go up and down again and again with 20 or so kilograms of mikan. My wheelbarrow kept getting stuck on stones or stumbling on steps, so I bought an E-Cat Kit to avoid those problems.”

The wheelbarrow he has is so old that no one actually knows when it came to the farm. But there were no problems using it with the E-Cat Kit.

“Simply holding the controller, the cart will start moving,” says Inoue. “Rather than pushing the cart, I feel that I have the kit carry the cargo.

“A female college student working part time here uses it. It has proven to be very helpful,” he added.

CuboRex is looking to expand the E-Cat Kit's scope of usage to cover “forms of transport other than wheelbarrows,” Kakazu said.

The company plans to work to make the E-Cat Kit, which sells for 143,000 yen ($1,290) after tax, known among more people outside the prefecture and in the non-agricultural industries while developing new products.