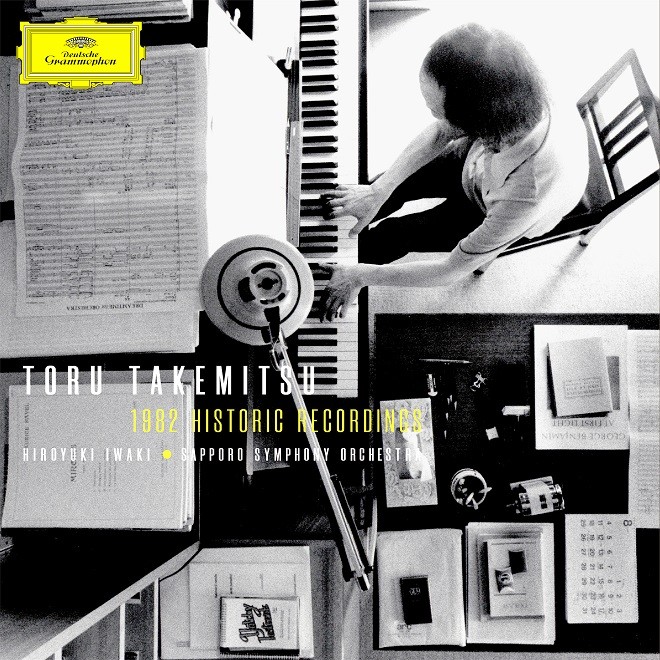 The CD sleeve for “Toru Takemitsu: 1982 Historic Recordings” to be released by Deutsche Grammophon on July 7 (Provided by Universal Music)

SAPPORO--For the lucky few who attended a June 27, 1982, live performance by the Sapporo Symphony Orchestra with Hiroyuki Iwaki conducting, that occasion now steeped in legend is available on compact disc.

Of course, the CD to be released July 7 is intended for a wider audience, but for those who were there that evening the disc is bound to be a treasured item.

The concert heralded world-premiere performances of three works by Toru Takemitsu (1930-1996), widely regarded as one of the most influential composers of the 20th century.

The CD will be released by Deutsche Grammophon, one of the world’s most celebrated classical music record labels. It will be the German company’s first release of a live performance by the SSO.

The concert was held at the former Sapporo Civic Hall with Iwaki (1932-2006) wielding the conductor’s baton. The music director enjoyed a close friendship with Takemitsu.

The recording was aired nationwide in September that year to celebrate the opening of FM Hokkaido Broadcasting Co. An audio tape of the recording kept at the radio station was discovered in 2016.

The combination of the various instruments and playing methods, known as the “Takemitsu tone,” produces a rich and beautiful sound.

Inserted between the second and third tracks is a 50-minute lecture by Takemitsu, during which he answers questions from the audience.

Passionate about introducing modern music, Iwaki often performed Takemitsu’s pieces for the SSO’s regular concerts and on other occasions.

In an interview published in the pamphlet for the 1982 concert, the composer said: “Orchestras in Tokyo have less of a passionate ambience than the SSO. It has techniques far more advanced than one would expect.”

In 1985, Takemitsu picked the Sapporo orchestra to record the soundtrack for Akira Kurosawa’s movie “Ran.”

“My father often said that composing music was a solitary work,” said Takemitsu’s daughter Maki, who works as a music producer. “I think that was all the more reason for him to find great joy in creating new music with Hiroyuki Iwaki and members of the SSO in whom he placed his trust.”

The album will sell for 3,850 yen ($35), including tax. It will also be available on music streaming services.