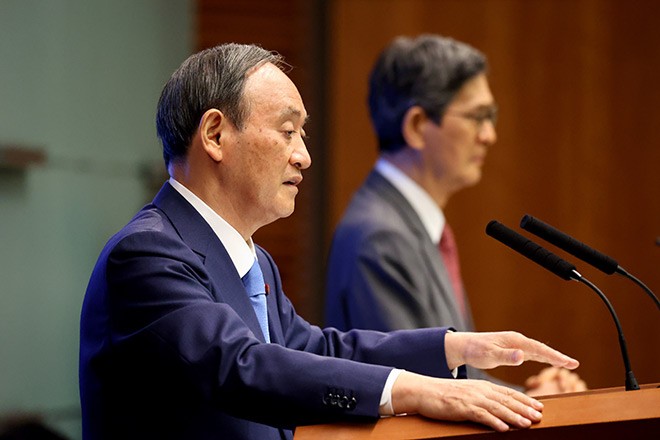 Prime Minister Yoshihide Suga at a news conference in Tokyo on June 17, with Shigeru Omi, chairman of the government panel of experts dealing with the novel coronavirus pandemic (The Asahi Shimbun)

Fresh cases of novel coronavirus infection in Tokyo have stopped declining and started showing signs of picking up again.

This is causing health experts to sound the alarm about the risk of an early rebound in new cases, but the government decided June 17 to lift the COVID-19 state of emergency for Tokyo and eight other prefectures on June 20.

Seven of those prefectures will be subject to less stringent “man-en boshi” measures to keep a resurgence in cases at bay.

But it is impossible to predict how those steps will be effective in curbing risky behavior in people forced to endure restrictions and inconveniences in their daily lives for so long.

The Tokyo Olympics is scheduled to start in about a month. Even if the behavior of the athletes can be controlled, increased flows of people in a festive mood could trigger a fresh wave of infections.

Prime Minister Yoshihide Suga, who bears a heavy responsibility to protect the people’s lives and livelihoods, must not take his eyes off the health risks stemming from the Olympics.

The state of emergency will be lifted except in Okinawa Prefecture, while seven prefectures, including Tokyo and Osaka, will be placed under man-en boshi measures.

The situation in Tokyo now is worse than when the state of emergency was lifted the last time in March after two extensions. Within a month of the measure being removed, Tokyo was hit by a rebound.

Experts say the number of new cases could bounce back again if more people start moving around, despite progress in vaccinations. The situation could deteriorate to the point the government is forced to reinstate emergency restrictions around the time the Olympics get under way in late July, according to their estimate.

The Alpha variant of the novel coronavirus, first identified in Britain, has emerged as the principal source of infections nationwide. This more transmissible variant has pushed health systems in the Kansai region around Osaka to the brink of being overwhelmed.

If the even more contagious Delta variant, first found in India, spreads widely, the overall situation will become even more precarious.

Preventing a resurgence should be the priority in responses to the pandemic. This is critical for saving health care workers from becoming even more stressed at a time when they bear the brunt of the burden of inoculating the population.

But there has been no significant progress in implementing the five-pillar action plan to deal with the crisis that the government announced when it lifted the state of emergency the last time, except for the acceleration of the vaccination program.

The number of hospital beds for patients has not increased significantly, nor has an effective system been established to monitor and contain variants. It is also doubtful whether the government’s program to test people without symptoms is proving effective in detecting signs of a resurgence.

Under man-en boshi measures, requests for restaurants to shorten their business hours will remain in place.

While they will in principle be able to serve alcohol until 7 p.m. on the condition they have received certification from prefectural authorities that proper precautions have been put in place, governors can urge establishments within their prefectures to refrain from doing so.

As the state of emergency has remained in place for an extended period, many restaurant businesses are complaining that they “cannot continue like this anymore.”

The government needs to step up efforts to establish a system that allows these businesses to operate with appropriate precautions in place and offer effective policy support, such as swift financial assistance, when they are asked to suspend or shorten operations.

Even though he has stressed that protecting the life and health of the people is his policy priority, Suga is forging ahead with plans to hold the Olympic Games without offering any specific risk estimate.

As people are forced to endure restrictions in their daily lives, they cannot help but feel the government is giving “special priority” to the Olympics.

In a recent editorial, The Asahi Shimbun called on Suga to call off the Olympics this summer. But the administration has turned a blind eye to the harsh reality of the pandemic and remains adamant about going ahead with the event, as if there is no turning back.

Foreign athletes coming to Japan to take part in the Games will be allowed to leave the Olympic village only to go to limited locations, such as games venues and training grounds. But an estimated 80,000 Olympic officials and executives will stay in Tokyo and its suburbs.

In addition, 70,000 or so volunteers and workers who will perform tasks such as preparing meals, cleaning, transportation and security operations will work in the Olympic village and venues. There is no ruling out the possibility that these human activities will lead to an expansion of infections.

The Olympics will be held during the summer vacation season, when more people move around and go out to eat.

Last summer, a growth in infections could be avoided as prefectural governors urged people to refrain from returning to their hometowns or visiting Tokyo during the summer break. This year, similar calls may be less effective if the Olympics are being held.

EMERGENCY SHOULD BE REINSTATED IF NECESSARY

Government officials are expected to allow up to 10,000 spectators for each Olympic event in line with the rules for sports and other events in areas not subject to man-en boshi measures, according to sources.

But these rules have been approved by experts advising the government on policy responses to the pandemic under the assumption that the Olympics will be handled differently from other sports events.

There is a strong case for differentiating the Olympics from sports events such as Nippon Professional Baseball and J.League soccer games in considering ways to prevent infections.

In a June 17 evening news conference, Suga stressed that the government’s policy of tackling the coronavirus crisis should be focused on preventing a major rebound as he sought public understanding and cooperation for the government’s strategy.

He also referred to the effectiveness of the vaccination campaign, citing the fact that the shares of elderly people and health workers in new cases have declined.

As for specific measures to ensure the security and safety of the Olympics, he said spectators should go straight to the venues and return home immediately after the event while trying to avoid the crowded times in traveling to the venue. He also called on people attending the Games to wear masks at all times and refrain from cheering loudly. Does he really think these measures will reassure the public?

Shigeru Omi, chairman of the government panel of experts on the pandemic, which approved the government’s decision to lift the state of emergency, said the government should reinstate the restrictions as soon as signs of a resurgence are detected.

In the news conference, Suga said he will remain willing to declare a state of emergency again or implement man-en boshi measures if necessary.

He should remain true to his words and take these steps without hesitation, if and when the necessity arises, even before or during the Olympics. It will be impossible to protect the lives and livelihoods of the people if the government adheres to its decision to hold the event and allow spectators to attend the Games no matter what.