Dancer Tanaka’s body ‘speaks’ as he portrays Hokusai in film 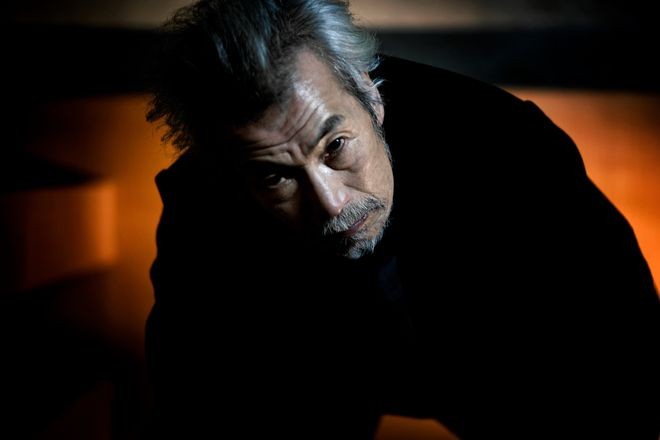 Internationally acclaimed dancer Min Tanaka also boasts a unique presence in cinema and only takes on parts that he can identify with.

"I only accept offers for characters who I may have ended up becoming if my destiny had gone off track just a little," he said.

Tanaka plays the older Katsushika Hokusai (1760-1849), a renowned ukiyo-e woodblock artist in the Edo Period (1603-1867), in the latter half of "Hokusai," taking over the role from Yuya Yagira, who plays the younger version of the artist.

Directed by Hajime Hashimoto, the film follows the life of Hokusai with vivid imagery. It shows how the artist is inspired by Kitagawa Utamaro and Toshusai Sharaku to start creating his own works.

While his artistic endeavors are oppressed by the shogunate, Hokusai continues fighting the challenges by drawing illustrations.

Tanaka was born in Tokyo in 1945. He started his own style of dancing in 1974, and has been appearing in many films and TV dramas.

He has often come into contact with Hokusai's works. The dancer said he was so struck by "Hokusai Manga" that he imitated some of the poses of people featured in the collection of sketches.

During the course of the story, Hokusai is stricken by the beauty of Mount Fuji while he is on the road. When the ukiyo-e master comes across the indigo color he has been looking for, he explodes in joy in the pouring rain, to a degree that he seems as if he is losing his sanity.

With fewer lines to deliver, Tanaka had to express the character's emotions using his entire body in many scenes.

"I think that after all, the body has been speaking from the beginning. That's why I continue to dance," he said.

Tanaka added that he feels like he is taking over Hokusai's body when he portrays the artist.

"I go into the body that I assume as Hokusai, spend some time and live in a part of the film. There is something more important than myself," Tanaka said.