Suga: Fans to be allowed to Olympic events in limited numbers 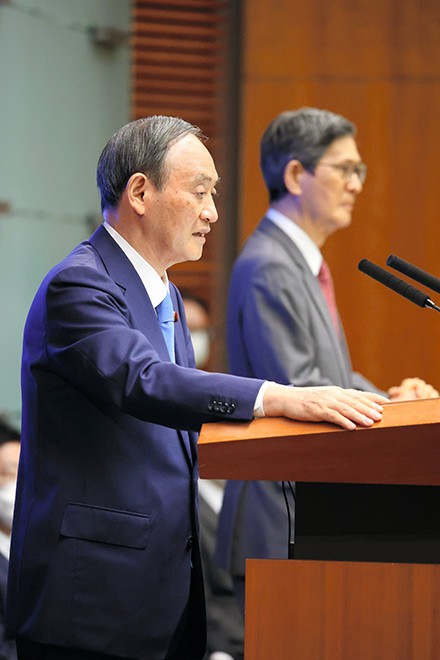 Prime Minister Yoshihide Suga, left, takes part in a news conference on June 17 along with Shigeru Omi, the chairman of the government panel of experts dealing with the novel coronavirus pandemic. (Koichi Ueda)

With the lifting of a months-long state of emergency decided, Prime Minister Yoshihide Suga is now moving toward allowing domestic fans to attend Tokyo Olympic events next month.

“A decision on the maximum number of spectators to be allowed for the Olympics will be made based on rules” established for large-scale events, Suga stated at a June 17 news conference to announce the lifting of the emergency curbs for the capital and eight other prefectures on June 20.

Seven of the nine prefectures will have pre-emergency measures in place from June 21 to July 11.

A government task force meeting held the same day added a new measure regarding major events. Currently, venues can only allow in half of the capacity of a facility, with an upper limit of 5,000. But for jurisdictions where pre-emergency measures have been lifted, the upper limit will be relaxed to 10,000 for a month or so. That new measure will likely be applied to the Olympics.

“(Spectators) will be asked to always wear masks and prohibited from cheering in a loud voice,” Suga said of restrictions on crowd behavior at his June 17 news conference. “It will also be important that they head straight to the venue and then straight home after the event is over. I understand the Olympic organizing committee is compiling such guidelines.”

A formal decision on spectator numbers for Olympic events is expected to be made early next week in a meeting involving central and Tokyo metropolitan government officials, the Olympic organizing committee as well as the International Olympic Committee and International Paralympic Committee.

And if there is another surge in COVID-19 cases, the government might be forced to consider holding Olympic events with no fans in the stands.

(This article was written by Taro Ono and Kayoko Geji.)