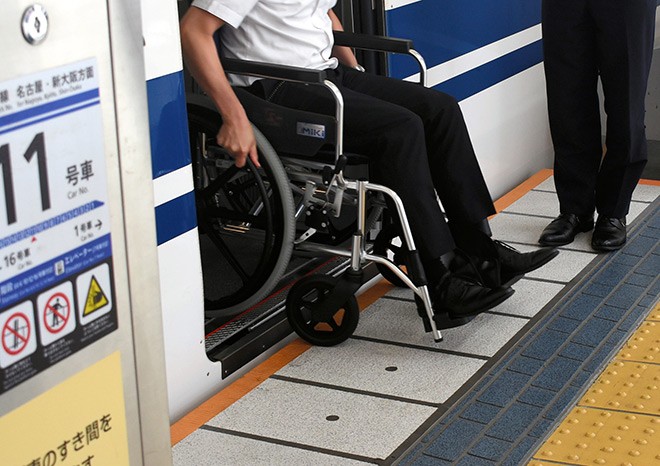 A Shinkansen platform at JR Tokyo Station has been improved to be more wheelchair accessible on June 17. (Takashi Ogawa)

Shinkansen platforms have become more wheelchair friendly at JR Tokyo Station thanks to improvements reducing the gap between the vehicle and platform, according to Central Japan Railway Co. (JR Tokai) officials.

Platforms No. 16 to No. 19 for the Tokaido Shinkansen are now equipped with rubber pads to reduce the gap between the edge of the platform and the bullet train car from between 9-11 centimeters to 7 cm.

The pads and leveling work also eliminate the difference in level from the platform to the train car from 5-8 cm to 3 cm.

It marks the first time this kind of improvement has been made to a Shinkansen station, JR Tokai said. The railway company unveiled the improved platforms on June 17 following the completion of the maintenance work.

The platform accessibility upgrades will “make it easier to accommodate the desire of people who want to move about on their own,” JR Tokai President Shin Kaneko said at a news conference.

The transport ministry has urged railway companies to make stations barrier-free before the Tokyo Olympic and Paralympic Games so that wheelchair users can get in or out of train cars by themselves.

The ministry has set the standard for a straight platform on a concrete track at a “7-cm gap and 3-cm difference” in height between a platform and a train car.

Conventional train lines have gradually seen improvements, but progress varies depending on the type of track.

East Japan Railway Co. (JR East) completed improvement work at all Yamanote Line stations except for Shibuya and Shinjuku. Work has been done on part of the Keihin-Tohoku Line as well.

The company is expected to improve seven Joban Line stations by the end of fiscal 2021.

Tokyo Metro Co. said stations on the Ginza, Chiyoda and Marunouchi lines and those close to Olympic venues have been made more wheelchair accessible.