A prowling bear races through residential areas and attacks four people in Sapporo on June 18. (Provided by a reader and Hokkaido Prefectural Police) 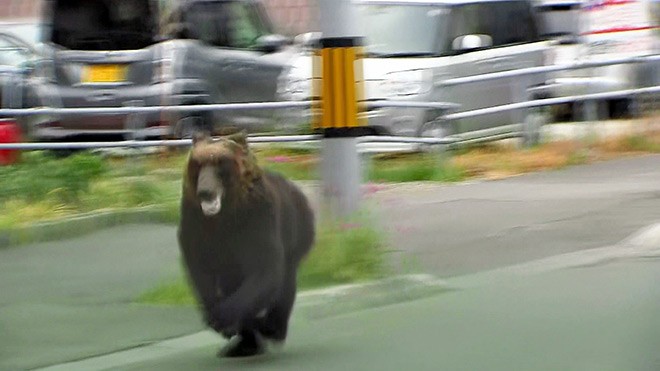 A bear dashes through a residential area in Sapporo around 6 a.m. on June 18. (Provided by Hokkaido Television Broadcasting Co.)

SAPPORO--A rampaging bear terrorized residents in a wide area of Higashi Ward here on June 18, injuring four people including a Self-Defense Forces member, before being killed by hunters.

The prowling beast forced the closure of schools in the ward and also disrupted flights at a local airport and daily operations at an SDF base.

Shortly past 11:10 a.m., the bear was killed by five shots fired by members of a hunters' association in a brushy area northeast of Okadama Airport.

The killing put an end to a nearly eight-hour rampage that put locals and SDF members on edge.

A resident spotted the bear on the street in a residential area in Higashi Ward around 3:30 a.m. on June 18 and notified police.

The initial spot where the bear was sighted is located along the city's subway Toho Line and close to an elementary school.

Sapporo city’s education board asked 40 elementary and junior high schools in the same ward to stop students from coming to school that day.

According to Hokkaido Prefectural Police’s Sapporo Higashi Police Station, the bear was about 1.5 meters in length.

After the initial sighting, the bear later appeared in another residential area two kilometers southwest and injured a man in his 70s and a woman in her 80s, in succession. Both suffered mild injuries.

The bear moved on to another residential area where it attacked a man in his 40s, injuring him severely. The man suffered a fractured chest and injuries to his arms, legs and back.

Around 7:55 a.m., the bear roamed into an area of the Ground Self-Defense Force Camp Okadama in the same ward.

According to an official of that camp, the bear appeared at the front gate and attacked a male SDF member, in his 40s, who was guarding the camp. The bear mauled the man's left flank with his claws, leaving cuts on his body.

The SDF member was transported to a hospital and received treatment for his injuries, described as mild, according to an official.

The GSDF camp ordered its members to remain inside buildings until the situation was brought under control.

It made its way onto the runways of Okadama Airport next to the camp.

Due to safety concerns, Okadama Airport’s runways were forced to temporarily close.

Flights in and out of Okadama connect to other locations in Hokkaido. The bear on the loose forced the cancellation of eight flights as of 11:30 a.m.