Shigeru Omi, chairman of the government panel of experts dealing with the novel coronavirus pandemic, and other health experts hold a news conference June 18 to explain the proposal they submitted. (Video footage by The Asahi Shimbun) 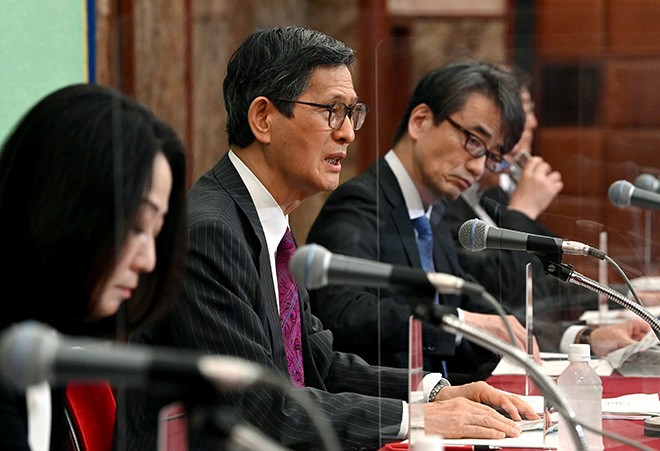 Shigeru Omi, second from left, the chairman of the government panel of experts dealing with the novel coronavirus pandemic, and other health experts hold an online news conference June 18 to explain the proposal they submitted. (Shinnosuke Ito)

The message from a group of top health experts could not be clearer: For safety's sake, don't allow spectators at the Tokyo Olympics due to start late next month.

Now, it is up to the government to decide whether to heed this advice, even as pre-emergency steps are scheduled to replace a months-long state of emergency that will expire on June 20.

The proposal submitted June 18 by the experts starkly spelled out a preference for not allowing any spectators at the Games that kick off July 23.

The central government and Olympic organizing committee must now grapple with how many, if any, spectators can attend the various Olympic events.

The sports extravaganza has already been delayed by a year because of the health crisis.

The scale of pedestrian traffic during an Olympics goes well beyond what occurs during professional baseball and soccer games.

The largest number of tickets sold for a single day for events to be held in Tokyo and its three neighboring prefectures already stands at about 430,000.

The proposal submitted by Shigeru Omi, chairman of the panel of experts advising the government on the novel coronavirus pandemic, and other health experts cited the increased flow of people during the Olympics as representing a major risk for spreading infections.

The proposal was submitted less than 24 hours after Prime Minister Yoshihide Suga expressed his intention to allow fans to the Olympic events.

However, a close associate of Suga clearly took the experts’ proposal to heart, noting that “it is based on scientific knowledge, so spectators should not be allowed in.”

The administration pushed ahead with its "Go To Travel" tourism promotion campaign and the ensuing surge in new COVID-19 cases resulted in  plunging approval ratings for the Suga Cabinet.

There are already signs in Tokyo of a fifth wave of infections. A similar surge of cases due to greater pedestrian traffic during the Olympics prompted  one executive of the ruling Liberal Democratic Party to say, “The prime minister will have to assume the political responsibility.”

While polls have consistently shown that 70 percent of the public is against holding the Olympics while the pandemic is raging, Suga has clung to the view that a successful outcome would bolster the LDP’s chances in the Lower House election that must be held this autumn.

He and other LDP lawmakers still favor spectators in the stands for Olympic events, if for no other reason than the positive impact that would have on the economy.

But with pre-emergency curbs to be implemented for Tokyo from June 21 until July 11, there are growing concerns about what should be done in the event those measures have to be extended until the Olympics.

“If those measures cannot be lifted (in time for the Olympics), the option of no fans in the stands cannot be dismissed,” said one high-ranking government source.

The general consensus is that a difficult political decision will have to be made regarding the spectator issue.

The organizing committee’s own roundtable of experts dealing with the pandemic met June 18 after receiving the proposal from Omi and agreed that a flexible approach was needed that could allow for changes to how many spectators are allowed depending on the level of new COVID-19 cases.

Some of the experts who joined in submitting the proposal admitted that their gut feeling was for no spectators at the Olympics.

“Our fundamental stance from the start was ‘no spectators,’” one expert said. “But the proposal would not have been accepted if we said that, so we also included the conditions that would have to be met in order to allow in some fans.”

Criticism was also raised that the proposal came too late, as government officials were already talking about allowing spectators.

Omi explained at the June 18 news conference that many of the experts wanted to present the proposal only after considering the latest data about new COVID-19 cases.

(This article was compiled from reports by Junichiro Ishii, Yuki Edamatsu, Hiroshi Ishizuka and Akiyoshi Abe.)