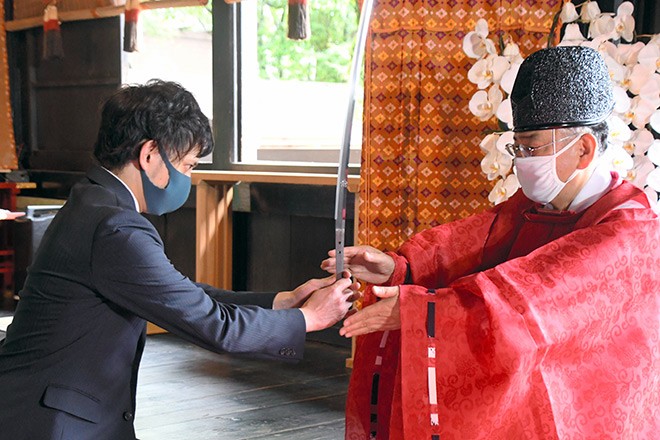 Torrential rains last July on the main southern island of Kyushu left the Aoi-Asojinja shrine here inundated with water. All of the shrine buildings were water logged, resulting in its collection of swords becoming rusty.

A crowdfunding campaign by the shrine led to donations far exceeding its initial goals, allowing for restoration of more than one damaged sword.

A ceremony was held June 16 to mark the return of the 60-centimeter sword created by master Kyoto swordsmith Takai Echizen Kami Minamoto Nobuyoshi. The words “Aoi Daimyojin,” a past name of the shrine, are etched into the blade.

The sword was presented to Aoi-Asojinja over 350 years ago by retainers of the feudal lord of the Sagara clan on his behalf.

When the shrine began its crowdfunding campaign last August, it set an initial goal of raising 5 million yen ($45,000). But that figure was reached just 90 minutes or so after the campaign began. Over the course of a month, 35 million yen was donated to the shrine.

“I had never seen anything like it in all my time as a swordsmith,” Kimura recalled thinking when he first set eyes on the damaged blade. “It was so badly rusted.”

As he had no experience in polishing a sword that had been damaged by exposure to water, Kimura gingerly tried a number of techniques.

He said the most difficult part was removing the rust while not erasing the carved characters on the blade.

Restoring swords involves a number of steps, such as polishing and bringing out the luster of the blade.

This time-consuming process meant that only seven swords could be restored as of June 16. Restoring all 77 blades will likely take about 10 years, Kimura said.

At the June 16 ceremony, Yoshifumi Fukukawa, the head priest of Aoi-Asojinja, carefully checked the swords presented to him by Kimura.

The sacred blade was placed in a white sheath that had the names of the 135 donors and others involved in the crowdfunding campaign written in ink.

“The luster has been restored to a level greater than before the disaster,” Fukukawa said after receiving the sword. “This has taught us that anything can be restored as long as everyone works together as one.”

The other swords will be returned to the shrine once the restoration work is completed.

The shrine is constructing a facility on its grounds to display its national treasures. The work is expected to be completed by summer 2022. The restored swords will be among the items displayed.