Push to get big companies to move away from carbon 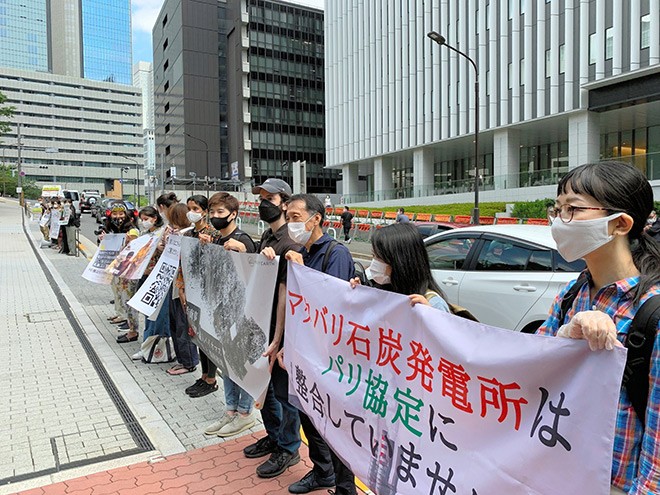 Members of an environmental group hold signs asking for support for a proposal submitted to the shareholders' meeting of Sumitomo Corp. on June 18. (Toru Ishii)

Environmental groups are turning up the heat on major Japanese companies that depend on fossil fuels in hopes of getting them to change their business practices and reduce their carbon footprint.

Although none of them has been able to emulate the stunning success of a U.S. hedge fund that in May convinced shareholders of Exxon Mobil Corp., the U.S.-based oil behemoth, to accept three candidates with environmental credentials as board members, the Japanese groups are not letting up.

Much of the focus in Japan is on convincing companies to move away from coal-fired thermal power plants, a sector in which Japan is the only Group of Seven nation whose government still actively backs such projects.

At the June 18 shareholders’ meeting held in Tokyo by major trading company Sumitomo Corp., the Australian environmental group Market Forces presented a proposal for Sumitomo to revise its articles of incorporation, thereby requiring it to compile and disclose in annual reports the company’s business plan to achieve the goals set out in the Paris Agreement on climate change.

The proposal was rejected.

In May, Sumitomo revised its policy direction for dealing with climate change and announced it would not enter into new coal-fired thermal plant projects and also move out of such operations entirely by late 2040.

However, the company did not rule out getting involved in the construction of two coal-fired plants being planned for Bangladesh.

When a member of Market Forces asked company executives if they had new plans for coal-fired plant projects, one official said, “We will not participate in any project that goes against the goals of the Paris Agreement.”

Kiko Network, a Japanese environmental group, has joined with a U.S. group in presenting a proposal to Mitsubishi UFJ Financial Group Inc. (MUFJ) asking that it revise its articles of incorporation to require it to compile and disclose loan and investment plans in line with the goals of the Paris Agreement.

Last year, Kiko Network submitted a similar proposal to Mizuho Financial Group Inc. While it was rejected, the proposal did manage to gain the consent of more than one-third of shareholders.

Local governments have also made proposals to companies asking that they shift from carbon dependence.

The proposal asked the utility not to handle electricity generated by new coal-fired thermal plants and install technology for carbon capture, utilization and storage at existing coal-fired plants.