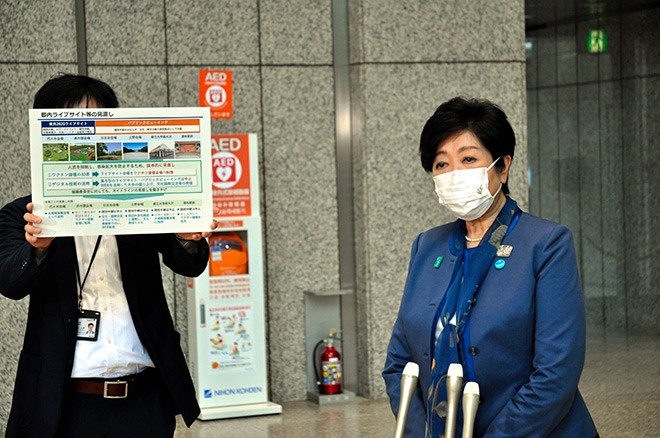 Tokyo Governor Yuriko Koike announces June 19 that all public viewing events during the Tokyo Olympics that would have been hosted by the metropolitan government will be canceled. (Rihito Karube)

Taking note of calls by health experts dealing with the COVID-19 pandemic, Tokyo Governor Yuriko Koike announced June 19 that all plans by the metropolitan government to organize public viewing events during the Olympics would be canceled.

The proposal submitted June 18 by experts, including some on the panel advising the government on steps to combat the health crisis, called for cancelling the events designed mainly to cheer on athletes outside of sports venues. Experts said the events would result in large numbers of people congregating, adding to the risk of spreading infections.

The metropolitan government announced earlier that the Yoyogi Park site would instead be used as a mass COVID-19 vaccination center. Koike said June 19 that a similar plan is now in the works for Inokashira Park.

In place of the public viewing events, the metropolitan government will consider ways of using the internet to generate enthusiasm for the Olympics while the Games are on.

Prior to meeting with reporters to make her announcement, Koike met with Prime Minister Yoshihide Suga for about an hour. She explained that they discussed a planned meeting on June 21 to decide how many spectators to allow in for Olympic events as well as the COVID-19 infection situation in Tokyo.

“I believe various measures are needed (such as cancelling public viewing) in order to ensure the Tokyo Olympics are a success,” Koike told reporters. “I also gained the understanding of the prime minister.”