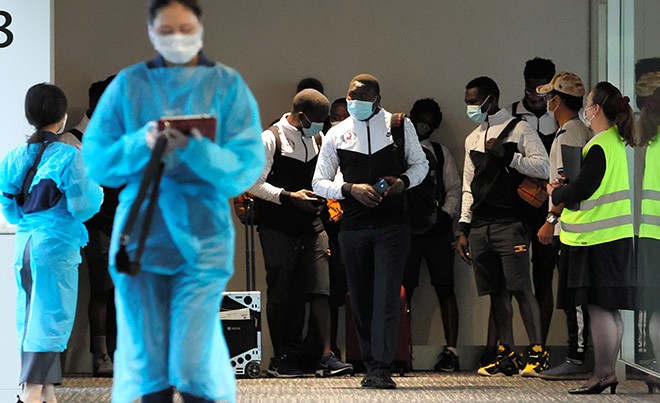 A member of Uganda’s national team tested positive for the novel coronavirus on arrival in Japan on June 19 and remains in quarantine, marking the first such case among those coming from overseas for the Olympic Games, Japanese government officials said.

All nine delegation members were given two shots of the AstraZeneca vaccine before their departure, according to the Cabinet Secretariat.

They produced certificates of negative test results to quarantine officials on arrival at Narita Airport outside Tokyo. Each of them took two polymerase chain reaction (PCR) tests within 96 hours of leaving Uganda.

Team members include a boxer, weightlifter, swimmer and coaches.

They turned up at the arrival gate just past 6 p.m. after 80 or so passengers had disembarked from the aircraft.

The team members were required to provide saliva samples for antigen testing.

One individual had to undergo a PCR test as the result of the antigen test was not definitive. The individual’s infection was confirmed after the PCR test, which is more sensitive than an antigen test.

The rest of the team later left on a chartered bus for Izumisano, a city in Osaka Prefecture, for a camp to prepare for the Summer Games that kick off July 23. They arrived at their hotel around 9:30 a.m. on June 20.

The Ugandan team is the second from overseas to arrive in Japan after the Australian softball squad, which is camping in Ota, Gunma Prefecture.