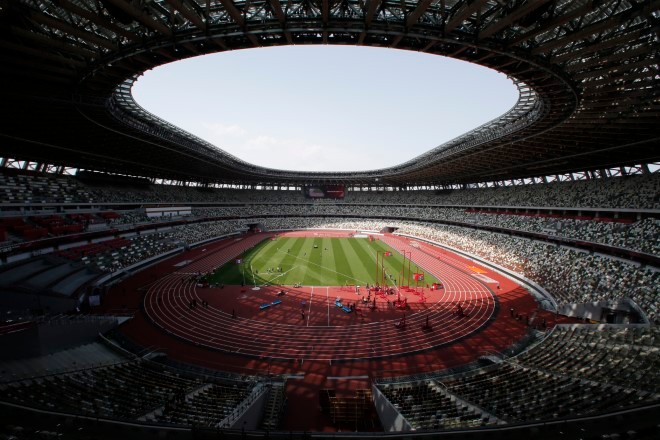 A general view of the National Stadium in the capital's Shinjuku Ward during an athletics test event for the 2020 Tokyo Olympics on May 9. (AP Photo)

The number of senior sports officials and family members arriving in Japan next month for the Tokyo Olympics will be further cut to around 53,000 in line with efforts to limit the flow of people due to COVID-19, organizers said.

A June 18 announcement on this came at a meeting between the Tokyo Olympic organizing committee and health experts advising the committee on ways to deal with the pandemic.

The 53,000 figure is about one-third of the 180,000 or so visitors that the organizing committee anticipated before the decision in March last year to delay the sporting extravaganzas to this summer.

It is also down from about 78,000 that the committee mentioned in May.

The latest figure breaks down to about 41,000 officials for the Summer Games and 12,000 for Paralympic events.

“The reduction was achieved partly because officials involved in the events will not be accompanied by others” when they come to Tokyo, said an official of the organizing committee.

The Opening Ceremony of the Tokyo Games is due to be held July 23 and the Paralympic Games on Aug. 24.