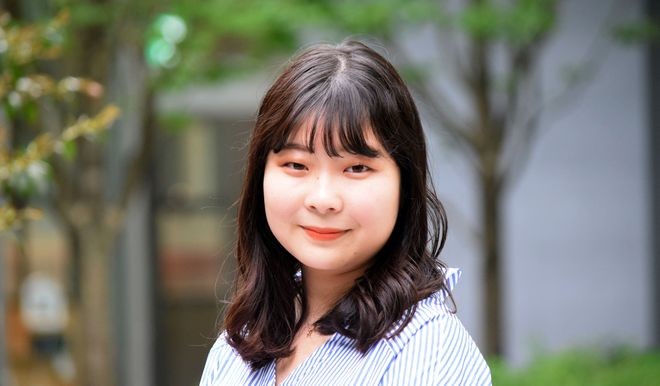 Kayako Maeda, a university student who initiated an online petition with two friends to call on search engine operators to ensure easy access to consultation services for victims of sexual abuse (Maki Okubo)

Yahoo! Japan Corp. has reconfigured its search engine setup in light of growing social awareness about victims of sexual abuse.

The service relies on Japanese words preregistered with Yahoo! Japan, such as “rape” and “sexual abuse.”

This ensures that the common helpline number “#8891” appears at the top of search results. The number directs callers to one of the “one-stop helpline centers,” along with a Japanese-language message saying, “Don’t keep it to yourself, seek advice.”

Clicking on the letters allows users to view a list of the helpline centers available in all of the nation’s 47 prefectures.

Yahoo! Japan worked with the Cabinet Office, which introduced the common helpline number, to change the way search results are displayed on June 3.

“We have spent several years studying how our search service could help to solve social issues,” said a Yahoo! Japan official, citing changing social perceptions about sexual abuse as a key factor.

The official said the company was aware of a recent online campaign.

A group of university students began collecting signatures in April for a petition, which calls, among other things, for a change in the way search engines operate.

When victims of sexual abuse go online for help and enter related words, pornographic websites and reports on real-life cases often appear at the top of search results.

As a result, they are often unable to find out about available counseling services and also exposed to more unpleasant content, experts said.

“I hope the setup of the cyberspace will continue to improve so victims of sexual abuse no longer find themselves isolated,” said a 22-year-old university student who initiated the petition under the pseudonym Kayako Maeda with two friends.

Maeda, who lives in Aichi Prefecture, was in her first year of high school when she was sexually assaulted after being forced into a restroom in a park by three males she had never met.

She had no one to turn to for advice. She drew a blank when she searched online for information on counseling services by typing in sets of keywords, such as “assaulted” and “street” and “groped” and “stranger.”

About six months passed before she got the opportunity to call a one-stop helpline center and receive counseling, Maeda said.

Diagnosed with post-traumatic stress disorder, she continues to suffer from flashbacks.

More than 29,000 individuals had signed the petition as of July 6. The signatures collected will be submitted to Google Inc., the Cabinet Office and other parties.