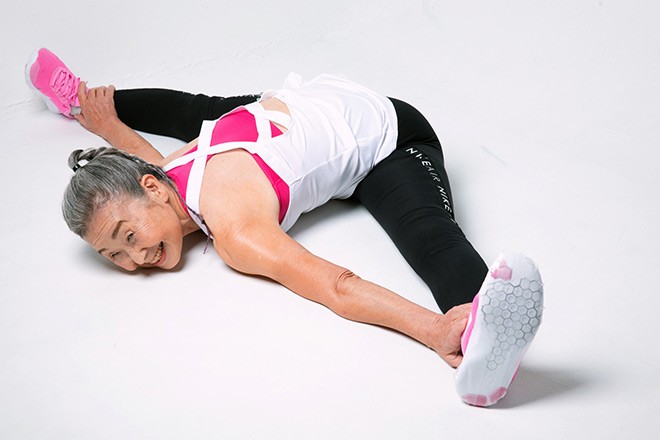 Fitness instructor Mika Takishima begins her exercise videos with a smile, raising her clenched fist and exclaiming, “Age is just a number!”

“You stumble on a small step, right? Let’s do some ankle exercise to prevent a fall.”

In one clip, she shows how to move the joints and shoulder blades in a circular motion. In another, she shares a five-minute workout for before bedtime.

Takishima created a stir online after she posted her videos for at-home exercise routines when much of the public was staying indoors due to the novel coronavirus pandemic.

Gaining the nickname Takimika, the trainer began to be featured on TV and in magazines.

She does squats and lifts a barbell loaded with 20 kilograms, and can almost do a full split with her chest touching the floor.

And yet, Takishima only became a trainer three years ago.

She wasn’t always the athletic type, having never taken part in sports club activities when she was a student.

Takishima’s first job was working at a department store, but she became a full-time homemaker after she married.

After her children grew up and left home, Takishima found herself with too much time on her hands. She hated herself when a family member pointed out she was getting fat.

Initially, Takishima couldn’t keep up with other members during group lessons.

Left behind, she worked out and danced in the back. She studied how others moved their bodies and learned exercise routines by following their examples.

For all the challenges, “I never imagined there was such a fun place,” she recalled thinking.

Takishima shed 15 kilograms in weight over the following five years. As a leaner Takishima built up her muscles, she found herself able to do more strenuous exercise routines and became obsessed with workouts.

Takishima learned how to swim at the age of 70. She started taking lessons from a personal trainer after she turned 79.

“When your heart moves, your body moves. You’ll get better if you don’t give up,” said her trainer, Tomoharu Nakazawa, 46. “She showed me that those things are true.”

At Nakazawa’s urging, Takishima made her debut as a fitness instructor when she was 87 to teach exercises at gyms and nursing homes for the elderly.

Takishima fully empathizes with the feelings of seniors who worry about their declining health or are not good at sports. She tells them not to push themselves too hard but never to give up.

Takishima was forced to suspend face-to-face lessons due to the pandemic and started posting her videos for those who had stopped exercising due to stay-at-home lifestyles.

She was contacted by a woman in her 30s who said that she had given up on her life but had second thoughts after watching the videos.

More than ever, Takishima says she is motivated to lift the spirits of people.

She makes it her routine to awake before sunrise to walk for four kilometers and jog for three. Once home, she sits up straight to watch television and walks on her tiptoes when she goes to the bathroom.

The joy in training is the fitness that results, she says.

Takishima does not follow a particular diet regimen. Instead, her emphasis is on a good breakfast with plenty of fermented food and protein such as natto fermented beans, yoghurt, fish, egg and vegetables.

She mainly eats banana for lunch, but enjoys two glasses of red wine and pre-cooked dishes at night. She is passionate about “daifuku” rice cakes stuffed with sweet bean paste.

“Being patient creates stress. I don't accumulate stress even in the slightest way,” Takishima said, adding that she takes things easy when she doesn’t feel like working out.

She believes that setting detailed goals and making strenuous efforts are the key to making exercise routines a habit.

When asked her current goal, she replied: “I just want to reduce my hip size by one centimeter.”

Takishima is eager to travel overseas to help others get healthier once the pandemic settles down, so she recently started studying English.

Some might say it is too late for a nonagenarian to start learning a foreign language. Perhaps, they ought to think again.