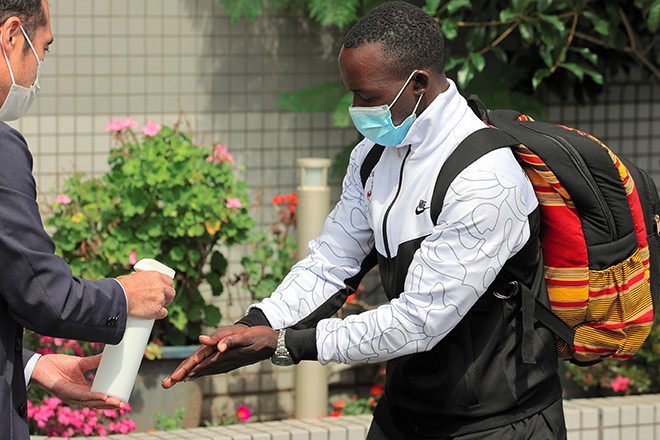 A member of Uganda’s Olympic team has his hands sprayed with disinfectant before entering a hotel in Izumisano, Osaka Prefecture, on June 20. (Jin Nishioka)

Health experts voiced fears that more members of Olympic delegations may test positive for COVID-19 at Japanese airports or even evade detection following the case of a Ugandan who failed a PCR test on arrival and was denied entry.

The individual in question is being held in quarantine at Narita Airport outside Tokyo.

The primary concern of health experts revolves around diagnostic testing and the efficacy of vaccines, which clearly are not failsafe.

News that one of nine members of Uganda’s Olympic team tested positive in a PCR test at Narita Airport on June 19 suggested there are limits to safety protocols put in place to ward off the virus.

Olympians, as well as coaches and staff, are required to present proof of negative PCR and other test results when they enter Japan.

The case of the Ugandan raised fears that some individuals may slip through the net, depending on when they got tested. The Ugandans are the second Olympic team from overseas to arrive in Japan for the Summer Games.

One problem is that PCR tests cannot detect the novel coronavirus in an individual who has only just become infected and the virus is still in incubation.

The member of the Ugandan team who turned in a positive test provided proof of testing negative in two PCR tests conducted within 96 hours prior to departure from Uganda.

An antigen test, which is less sensitive than a PCR test, is usually conducted for overseas arrivals.

The Ugandan was required to take a PCR test as the antigen test did not show a definitive result.

This case suggests the individual’s virus level rose during the long flight to Japan, which only then showed up in the later PCR test.

More worrying is that it shows COVID-19 vaccines do not automatically offer immediate 100 percent protection. It would seem to depend on which vaccine was used and when the last jab was administered.

All nine members of the Ugandan Olympic team were fully inoculated with two shots of the AstraZeneca vaccine before they left for Japan.

When it comes to the Pfizer-BioNTech vaccine, the figures for effectiveness are much better, at 93 percent and 88 percent, respectively.

No vaccine has yet proved to be 100 percent effective.

The data shows that vaccines provide protection against developing symptoms. But the efficacy of vaccines to prevent infection still remains unclear.

However, health experts agree that a second vaccine jab offers the best protection, although not immediately.

It is not known when the Ugandan member who tested positive received a second shot.

Given slow vaccine rollouts in many parts of the world, there are fears that a good number of athletes will arrive in Japan shortly after receiving their second jab when they have less than optimum protection.

Questions have also been raised about the veracity of proof of testing negative in PCR tests. Certification is issued by the testing agency of each country.

However, skeptics have pointed out that the document can easily be forged. In light of this, it is plausible that some positive cases could be missed after testing.

Full details of the Ugandan member’s case are not available yet.

Health experts expect more positive cases will turn up in Olympic delegations in coming weeks despite proof of negative test results and full vaccination against COVID-19.

They also would not rule out the possibility of cluster outbreaks in the Olympic village if some delegation members go undetected through airport quarantine.

To prevent the spread of the virus, isolating individuals upon entry to Japan is crucial.

However, the third and final version of the so-called Tokyo 2020 Playbooks--which set rules on behavior for athletes and other delegation members to follow--exempts them from quarantine on condition that individuals are tested daily and have their overall health condition monitored more closely.