Asahi survey: If Olympics go ahead, 53% want no spectators 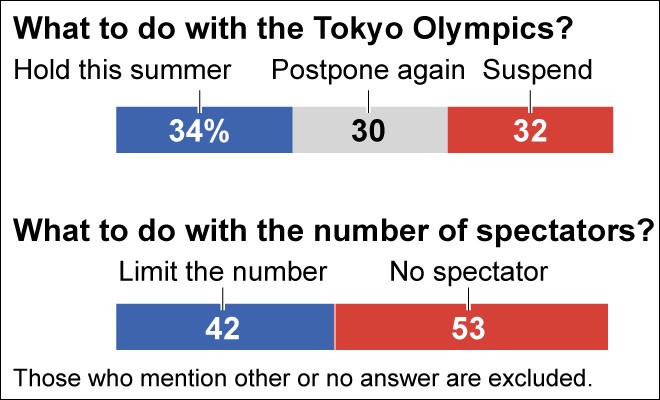 With only 32 days to go before the Tokyo Olympics open, 62 percent of voters want the event to be either canceled or postponed again, the latest Asahi Shimbun survey shows.

In a nationwide survey conducted on June 19 and 20, 34 percent of 1,469 respondents said the Games should be held this summer, a jump from the previous survey in May when just 14 percent said so.

But 32 percent of respondents maintain the Games should be canceled and 30 percent said it should be postponed once more. The strong opposition to holding the Games this summer, however, has lessened from the previous survey, when those numbers were 43 percent and 40 percent, respectively.

Just over half, 53 percent of voters, said no fans should be allowed in the stands should the Olympics be held as scheduled this summer, while 42 percent said the Games should be held with a limited number of spectators.

Prime Minister Yoshihide Suga has repeatedly stated that the government and organizers are doing everything they can to make the sporting extravaganza a “safe and secure” event amid the novel coronavirus pandemic.

But survey respondents overwhelmingly rejected such an optimistic view, as 83 percent said they “feel unsafe” about staging the Games in Tokyo this summer.

Women were more supportive of the idea of having no spectators if the Games are still held, at 57 percent, while 49 percent of male respondents answered that way.

Even among those who support the ruling Liberal Democratic Party, 81 percent said so.

Among those who support the main opposition Constitutional Democratic Party of Japan, 93 percent said so.

Suga has stated that pressing ahead with the Olympics in the middle of the global pandemic will show that the world can “overcome the difficulty of the situation by people’s efforts and wisdom.”

But 54 percent of respondents said they “were not convinced” by Suga’s explanation, while 38 percent said they were satisfied with it.

The approval rating for the Suga administration is 34 percent, one point up from its lowest rating recorded in the May survey. The disapproval rating is 42 percent, down from the previous survey’s 47 percent.

The administration appears to have lost popularity among young adults, while it was shored up by support among older people.

Approval dropped from 44 percent in the May survey to 39 percent among those between the ages of 18 and 29. Approval also dropped among those in their 30s from 34 percent to 26 percent.

But for those in their 60s, approval increased from 25 percent to 31 percent, and it increased among those 70 or older from 30 percent to 37 percent.

The central government on June 20 lifted the state of emergency for nine prefectures but not for Okinawa Prefecture.

The answers differed by region.

It received 607 valid responses, or 53 percent, of the 1,149 households with at least one eligible voter that the survey contacted via landline.

There were 862 valid responses, or 43 percent, from 1,991 mobile phone numbers of eligible voters that were called. Valid responses totaled 1,469.