No spectators an option if state of emergency on during Olympics 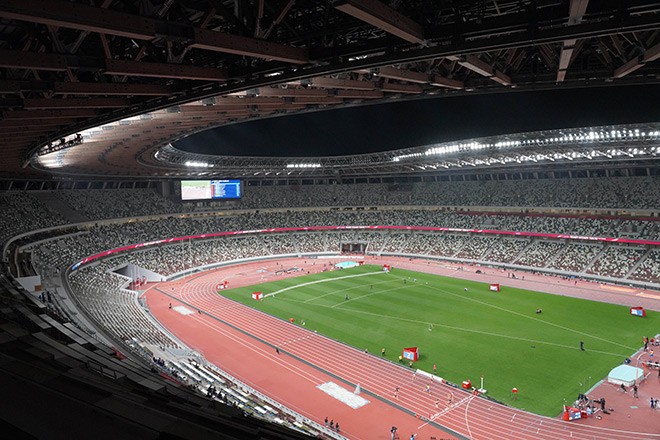 The Tokyo Olympics and Paralympics could be held without spectators if a COVID-19 state of emergency is issued that runs during the Games, according to the state minister of economic revitalization.

Yasutoshi Nishimura, who is also in charge of the government’s novel coronavirus measures, hinted at the possibility during a debate program aired by Japan Broadcasting Corp. (NHK) on June 20.

The same day, the nation’s third state of emergency was lifted for the capital, which is now covered by pre-emergency measures.

“Spectators might not be allowed at events as a general rule (in areas under a state of emergency),” he said. “An appropriate decision will be made (on whether to allow attendance at the Games) based on what rules are in place.”

When asked about the possibility of another state of emergency being issued during the Olympics and Paralympics, Nishimura said the government will not hesitate to swiftly make an emergency declaration if necessary by monitoring the status of the health care system.

The government allows events to be held with half the capacity, or up to 5,000 people, in areas covered by a state of emergency.

But Nishimura pointed out that the government asked organizers to stage events without spectators during the Golden Week holidays from late April through early May.

He said the same rule might be applied in the event of another emergency declaration, depending on the spread of infections, and that a decision on attendance at the Games will also be made by taking the matter into account.

As for criteria for issuing a state of emergency, Nishimura indicated that the government will pay more attention to the occupancy rate of hospital beds for COVID-19 patients in serious condition than the number of new infections.

“Some simulations showed progress in the vaccine rollout could help curb the number of patients with serious symptoms,” he said. “What matters is the number of serious cases and the occupancy rate of (hospital) beds. We put top priority on the capacity of the health care system when deciding (on whether to make an emergency declaration).”

During a Fuji Television Network Inc. news program aired on June 20, Chief Cabinet Secretary Katsunobu Kato also indicated that the Olympics and Paralympics might be held without spectators if a state of emergency was issued.

“The same rules (on attendance) will be applied to the Games and other events, in principle,” he said.

Prime Minister Yoshihide Suga told reporters on June 21 that he is ready to hold the Olympics and Paralympics without spectators if an emergency declaration is in place, saying it is natural to give top priority to ensuring a safe and secure Games.

But Suga did not reveal what response will be taken if pre-emergency measures are extended.

Shigeru Omi, who heads the government’s expert panel on the pandemic, and other experts released a proposal on June 18 that said it would be desirable if the Olympics were held without spectators.

(This article was written by Keishi Nishimura and Naoki Kikuchi.)