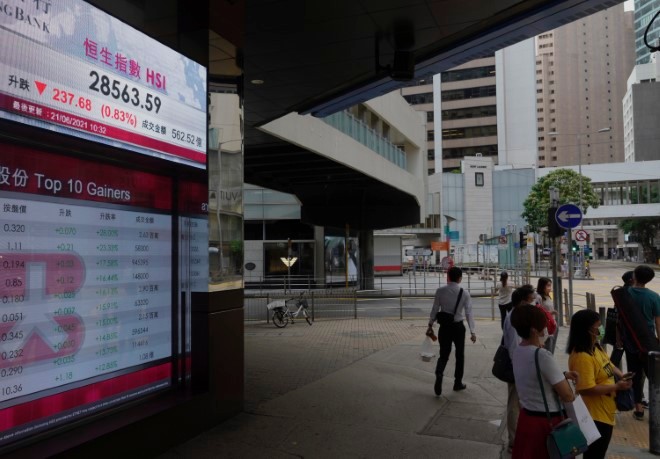 BANGKOK--Asian markets skidded on Monday, with Japan’s Nikkei 225 index down 3.4 percent, after a sell-off Friday on Wall Street gave the S&P 500 its worst weekly loss since February.

Investors are still recalibrating their moves after the Federal Reserve’s signal last week that it may raise current ultra-low rates sooner than had been expected. That gave the Dow Jones Industrial Average its worst weekly loss since last October.

Part of the Fed’s mission is to keep prices under control. The fear is that burgeoning inflation may prompt central banks to dial back the lavish support that has lifted markets to new highs after they plunged at the onset of the coronavirus pandemic last year.

“The shift to an earlier timeline for a rate hike, accompanied with an upward revision in core inflation forecast to 3 percent, seems to suggest that the Fed may still be concerned about inflationary pressures to some extent as opposed to its previous stance of letting inflation run wild," Yeap Jun Rong of IG said in a commentary.

South Korea reported its exports rose nearly 30 percent in the first 20 days of June in the latest indication that the region’s recovery is steaming ahead despite lingering outbreaks of infections in many places.

The Fed also has begun talks about slowing its $120 billion of monthly bond purchases, which are helping to keep mortgages and other longer-term borrowing cheap. But the Fed’s chair has said such a tapering is still likely a ways away.

Markets were spooked after St. Louis Federal Reserve President James Bullard said Friday on CNBC that his personal prediction was that the first rate increase may come as soon as next year.

It’s an acknowledgment that a rebounding economy with near-record prices for homes and stocks may not need super low rates much longer. A recent burst of inflation may also be upping the pressure. But any pullback in Fed support would be a big change for markets, which have been feasting on ultra-low rates for more than a year.

Still, the major U.S. stock indexes remain relatively close to their record highs, as the economy continues to leap out of the recession caused by the pandemic. The S&P 500 is only about 2 percent below its all-time high set on Monday, and the Dow is within 5 percent of its record set last month.

A measure of nervousness in the stock market, known as the VIX, rose Friday but is only back to where it was about a month ago.

The 10-year Treasury yield eased to 1.40 percent on Monday from 1.43 percent late Friday.

In other trading, U.S. benchmark crude oil rose 45 cents to $72.09 per barrel in electronic trading on the New York Mercantile Exchange. It gained 60 cents to $71.64 on Friday. Brent crude, the international standard, picked up 35 cents to $73.86 per barrel.