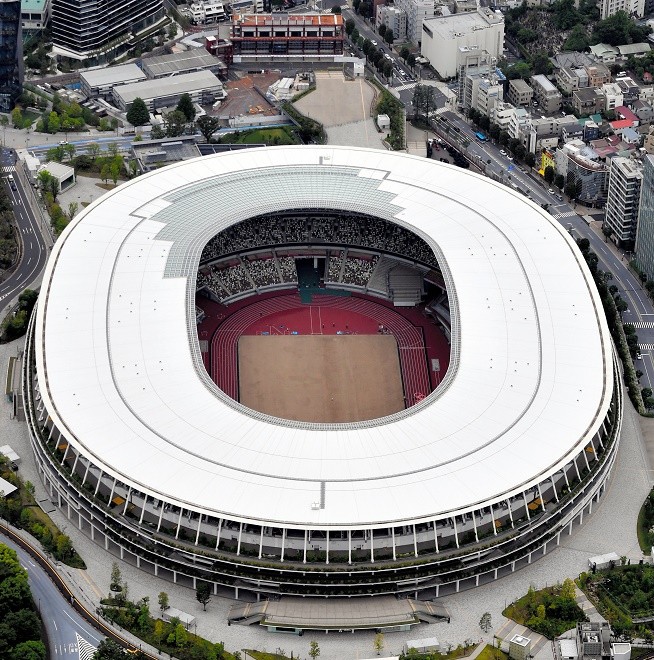 The National Stadium, the site of the Opening and Closing Olympic ceremonies, in Tokyo’s Shinjuku Ward on May 16 (Asahi Shimbun file photo)

The government’s decision to allow spectators to attend Tokyo Olympics and Paralympics events in limited numbers under the shadow of the COVID-19 pandemic amounts to shocking disregard for science.

The Suga administration is forging ahead with the Games even though the world is in the grip of a health crisis. This defies common sense. Ignoring the advice of health experts, it will permit up to 10,000 domestic fans at venues.

Its policy decisions have raised concerns that the international spectacle could amount to nothing more than a symbol of self-righteous and reckless political acts based on disrespect of scientific knowledge, instead of being “a celebration of victory over the new coronavirus” as Suga has tried to frame the Summer Games. We find it impossible to support the decision.

In a meeting held June 21, officials from the International Olympic Committee, the Tokyo metropolitan government, the Suga administration and other parties agreed on special rules concerning spectator numbers during the events.

Organizers set a limit of 50 percent capacity--up to a maximum of 10,000 fans--for each Olympic venue, assuming that “man-en boshi” pre-emergency measures in place in Tokyo and elsewhere to keep a resurgence in cases at bay will be lifted by the time the Olympics start in late July.

The government says this formula is based on measures taken for large-scale events approved last week by the panel of experts advising the government on the pandemic. However, the panel said the rules should not be applied to the Olympics. Epidemiologists called for more stringent standards, but their argument effectively fell on deaf ears.

This is yet another example of how the government respects expert opinions that suit its policy but ignores them when they do not, a tendency that has been noticeable since the pandemic flared last year.

The Olympic Games are critically different from sports events such as Nippon Professional Baseball and J.League soccer games in that multiple Olympic events are held throughout the day at venues that are close to each other.

According to an Asahi Shimbun estimate, even if spectator numbers are capped at 5,000 for each event, up to 68,000 people will visit the seven venues located within 1.5 kilometers of each other in Tokyo’s bay area on any given day. The number is even higher if volunteers and others involved in some way are counted.

An Asahi Shimbun editorial last month urged Suga to cancel the Tokyo Olympics and Paralympics. We have not changed our view.

If the government sticks to its guns, political leaders will be responsible for making every effort possible to minimize the health risks.

If it had paid serious attention to recommendations announced June 18 by Shigeru Omi, the chairman of the government advisory panel, and 25 other experts, the government could not possibly entertain the idea of allowing up to 10,000 spectators at each Olympic event.

The experts' recommendations also said that any signs of a resurgence of infections or the health care system becoming overwhelmed by new patients should prompt the government to immediately change the rules and bar fans.

This is a reasonable call in light of the current rate of infections, flows of people in Tokyo and the spread of more contagious virus variants.

Organizers apparently agreed on flexible responses to changes in the situation during the June 21 meeting. But it is hard not to worry about how the administration will actually respond to changing circumstances, given its history of formulating related plans and schedules and determining the terms of the state of emergency and policy measures to curb infections in line with the preset Olympics dates.

There is an imperative need for the administration to present to the Japanese people and the entire world clear and easy-to-understand criteria for what actions will be taken and under what circumstances.

Government decisions on whether or not to reinstate or remove COVID-19 restrictions should not be influenced by concerns about the impact on the Olympics. This is so obvious, it should hardly need mentioning.