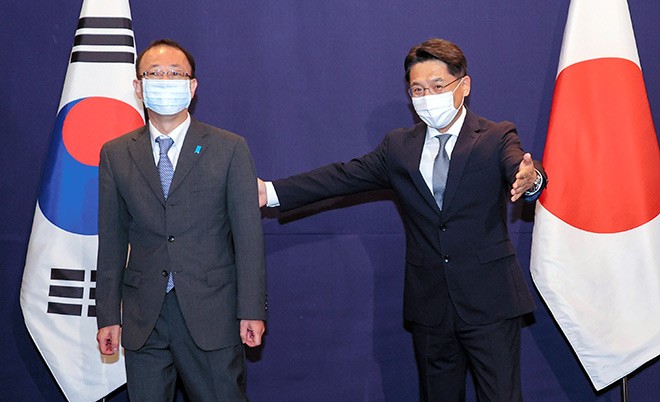 Takehiro Funakoshi, left, director-general of the Foreign Ministry's Asian and Oceanian Affairs Bureau, meets June 21 in Seoul with Noh Kyu-duk, South Korea's special representative for Korean Peninsula Peace and Security Affairs. As yet, there is no word on whether the leaders of the two countries will hold summit talks anytime soon. (Provided by Dong-A Ilbo)

Prospects of face-to-face talks between the leaders of Japan and South Korea show no signs of an imminent turnaround after more than 18 months of silence, even with the Tokyo Olympics looming next month.

While issues relating to imperial Japan's wartime treatment of South Korea continue to serve as a major impediment to improved bilateral ties, the latest hurdle stems from what South Korean media considers a major breach of diplomatic protocol by Prime Minister Yoshihide Suga at the Group of Seven summit meeting in Britain earlier this month.

South Korean officials initially proposed a casual conversation of about 20 to 30 minutes between Suga and South Korean President Moon Jae-in on the sidelines of the summit, but Suga was decidedly cool toward Moon, according to sources.

Officials in Seoul had begun compiling points to be raised during the talks because tentative agreement for such a meeting had already been reached, a South Korean diplomatic source said.

A high-ranking Japanese Foreign Ministry official said similar steps were taken in Tokyo because the prime minister could not simply ignore Moon if he initiated a conversation.

Moon approached Suga on three occasions during the G-7 summit, one of which was at a barbecue for the participants, government sources said.

Suga thanked Moon for the gesture but said he could not enter into detailed discussions since working-level officials had not coordinated matters between the two sides.

When asked why Suga did not go beyond simple greetings, Chief Cabinet Secretary Katsunobu Kato explained that the tight schedule of the G-7 summit made in-depth discussion difficult.

It was Suga who ultimately decided what direction the conversation would take, according to a high-ranking Foreign Ministry official.

Tokyo's position on easing deep strains in bilateral ties is that Seoul must make the first move to resolving the thorny matter of compensation lawsuits brought by former "comfort women," and other issues pertaining to the two countries' shared history.

Suga apparently did not want to be caught up in a detailed discussion with Moon if he came without something specific to propose.

Suga admitted to associates after his return to Japan that he was most concerned about what South Korea would do at the G-7 summit.

Moon himself took to social media after the summit and expressed regret at being unable to hold formal talks with Suga.

As a result, South Korean officials say it is doubtful Moon would meet with Suga even if he decided to attend the Opening Ceremony of the Tokyo Olympics scheduled for July 23.

According to several South Korean government sources, officials have pushed their Japanese counterparts for such a meeting if Moon comes to Tokyo.

South Korean officials recalled that Suga's predecessor, Shinzo Abe, attended the Opening Ceremony of the Pyeongchang Winter Olympics in 2018, during which time he spent about an hour chatting to Moon.

South Korean officials are hoping that something similar could happen at the Opening Ceremony in Tokyo.

However, sources in the prime minister’s office said that simply coming to Tokyo would not guarantee a summit meeting will take place.

For this reason, South Korean officials are increasingly pessimistic about the prospects of a visit to Japan in July by Moon.

(This article was written by Takuya Suzuki in Seoul and Ryutaro Abe in Tokyo.)