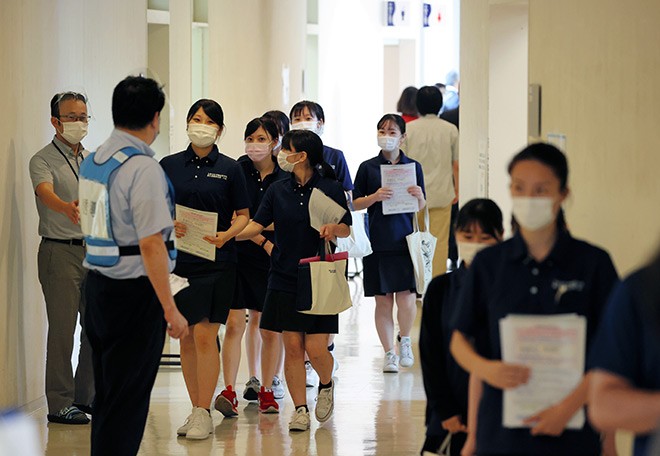 Students and staff at Nagasaki International University are headed to a campus-wide vaccination site on June 21 in Sasebo, Nagasaki Prefecture. (Minako Yoshimoto)

School-aged children between ages 12 and 15 should be inoculated at local clinics and not at school-wide vaccination sites to avoid peer pressure and identifying those who refuse the shots, according to education ministry guidelines.

Local governments were notified of the guidelines on June 22.

In May, the ministry decided to include children aged 12 to 15 in the central government’s vaccination project, which uses the Pfizer vaccine.

But to prevent identifying children who refuse a vaccination, the ministry has decided not to encourage local governments to conduct a school-wide inoculation.

Instead, children are urged to go to a primary care doctor or a vaccination site run by local governments.

If a school decides to conduct a mass vaccination, it should be planned during a summer break and not during classes to prevent peer pressure.

It has been reported that both the Pfizer and Moderna vaccines, which are currently used in Japan, are highly effective and safe.

Initially, the Pfizer vaccine was authorized to use for people who are 16 or older.

But after additional clinical trials, the vaccine is allowed to be used for those 12 or older from June.

But it is believed that younger people more often tend to report experiencing pain and a fever after being inoculated.

According to an interim report that surveyed about 20,000 health care workers in Japan who received a Pfizer vaccine, younger people more frequently tend to develop a fever higher than 37.5 degrees, a headache or suffer from fatigue.

According to the Centers for Disease Control and Prevention (CDC), post-vaccination adverse reactions vary slightly by age group in the United States.

About 10,000 people who are between 16 and 25 reported an adverse reaction. Among these, 22 percent cited dizziness, 18 percent complained of a headache, 16 percent reported a fever and 16 percent noted feeling nausea.

About 1,500 children who are between 12 and 15 reported an adverse reaction. Among these, 28 percent felt dizziness, 21 percent reported fainting, 10 percent reported their skin turning pale and 9.5 percent experienced a loss of consciousness.

During the same period, about 3.26 million vaccine shots were administered to children between the ages of 12 to 15.

As a whole, such reports of adverse reactions are rare.

The Japan Pediatric Society on June 16 released its recommendations on vaccinating children.

The society said it is meaningful for children to be vaccinated. It added that it is ideal for them to be vaccinated individually under the assumption that the parents and child fully understand the pros and cons of the vaccine and that meticulous care is provided before, during and after the vaccination.

“It is important to prevent an adverse reaction from occurring by offering a full pre-vaccination explanation to calm the nerves,” the society said.

Takashi Nakano, a professor in pediatrics at Kawasaki Medical School, said, “Young people are more likely to feel nervous and stressed before and after getting a vaccination and faint more than other age groups.”

(This article was written by Kazuyuki Ito, Junya Sakamoto and Kenta Noguchi.)