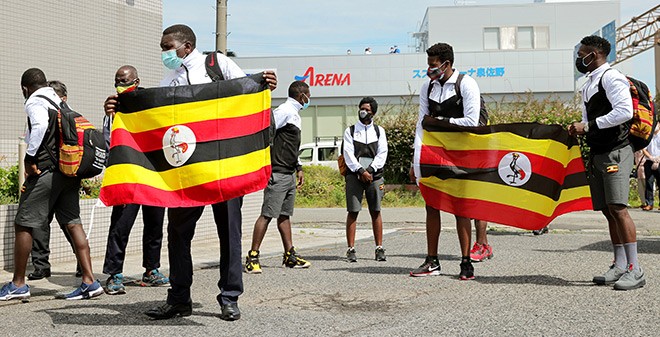 Japan’s handling of Olympic delegations arriving from overseas was brought into question after a member of Uganda’s team tested positive for COVID-19 at Narita Airport and was placed in quarantine while the other team members continued on to their training camp in Osaka Prefecture.

No additional tests were performed on the remaining eight team members after they tested negative in antigen tests given at the airport outside Tokyo.

Lawmakers voiced doubts about the decision not to quarantine the entire Ugandan delegation before they left the airport during a meeting with government officials on June 21.

“Seeing as the other eight individuals traveled together with the person who tested positive, it is surely reasonable to assume that they were all in close contact,” said a lawmaker with the main opposition Constitutional Democratic Party of Japan who questioned the health screening setup at airports. “They should not have been allowed to leave the airport.”

Hordes of Olympians, coaches and officials will descend on Tokyo next month for the Summer Games that kick off July 23.

The Ugandan team arrived at Narita around 6 p.m. on June 19. All the members had documentation showing they had been fully vaccinated prior to departure and had tested negative for COVID-19.

However, a coach was found to be infected after a PCR test was given at the airport. The PCR test was performed as a safeguard after an earlier antigen test did not produce a definitive result.

The other delegation members tested negative in antigen tests and were not required to undergo an additional PCR test.

They left the airport by chartered bus early June 20 to reach the team's training site in Izumisano city, Osaka Prefecture.

Officials in Izumisano announced June 22 that the eight members and a city employee who accompanied the team from Uganda are having their health condition monitored constantly due to fears they might have been exposed to the novel coronavirus.

The prefectural health center there identified them as a group at risk.

So far, they have all tested negative during daily PCR tests, according to officials.

Quarantine officers at Narita did not check the members to ascertain if they had been in close contact with the coach during the long flight to Japan.

The team arrived at a hotel in Izumisano later that morning, having been driven nonstop. They are effectively self-isolating in the hotel, according to city officials.

During the June 21 meeting, health ministry officials said the task of identifying individuals at risk of having become infected with the virus lies with local public health officials wherever team members are staying.

“Local authorities are supposed to determine who has been in close contact based on information on passengers that airlines provide to the central government,” said one official.

But another lawmaker took issue with the ministry’s approach, likening it to passing the buck to a public health center in a local region.

In Osaka, a prefectural official expressed anger over the central government’s decision to permit the Ugandan team to leave the airport, saying it posed an unacceptable risk if the virus has already been passed to other members during the journey from the airport in Chiba Prefecture.

“Since the infection of one person was confirmed at Narita Airport, the central government should have identified who were at risk of contracting the virus,” the prefectural official said.

According to the health ministry, passengers seated within two rows of an infected individual during a flight are required to have their health monitored on a regular basis upon arrival in Japan.

The public health center in Izumisano said identifying such individuals is possible if information is made available, such as physical distance of others who were seated close by, whether they wore masks and how long they spent chatting with the infected individual.