Transgender American and her wife sue over gender registry 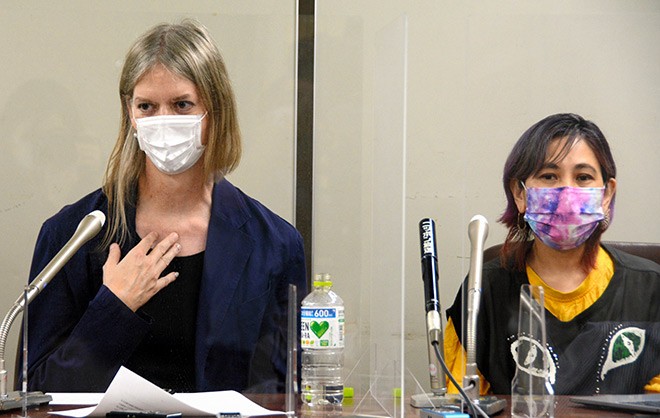 Elin McCready, left, and her wife, Midori, at a news conference in Tokyo on June 21 (Yuri Murakami)

A transgender American woman and her Japanese wife are suing the government for refusing to officially change her registered gender to female without listing her partner as a family relative instead of her spouse.

Elin McCready and her spouse, Midori, filed a lawsuit with the Tokyo District Court on June 21 for violating freedom of marriage and personal rights guaranteed under the Constitution. They are seeking 2.2 million yen ($19,920) in damages.

“We’re supporting each other as a family,” Elin said at a news conference after filing the suit. “I want the central government to review its definition of a family.”

Midori said, “We filed the suit to create a society where people can live the way they are.”

Elin changed her gender status from male to female in her home state of Texas in 2018 because her gender identity has been inconsistent with her biological gender since her childhood. Her gender listed on her residence card issued by the Japanese government was also changed to female.

She also applied to change her gender on her residence certificate at the Meguro Ward office in Tokyo.

But an official said the change could not be made so long as Midori is registered as Elin’s wife. The official proposed that Midori change how her relationship to Elin is listed from spouse to relative.

The couple rejected the proposal, and Elin remains registered as a male on her residence certificate.

The ward office’s response reflects the stance taken by the Japanese government, which does not recognize same-sex marriages.