TOWARDS EQUALITY: Women making their way to the top in international institutions 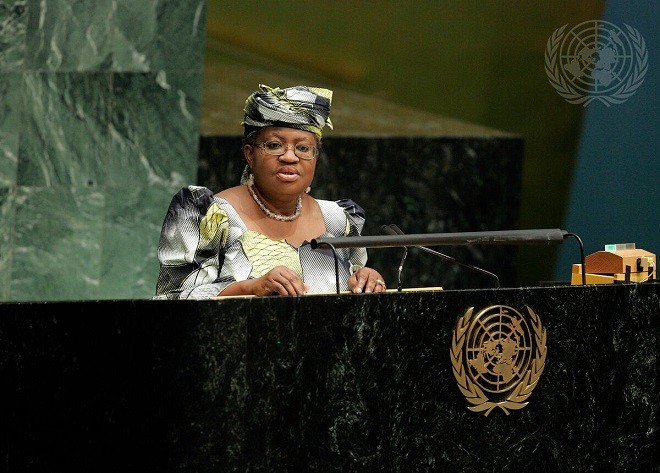 For the first time in the history of the U.N. Office at Geneva, a woman, Tatiana Valovaya, is running the show.

Still, men still seem to be the masters of this world, as it were.

Could this balance of power change?

What rings loud and clear is that the U.N. office is making solid strides toward equality. This is particularly the case in Geneva, where women did not win the right to vote and stand for election until March 6, 1960.

Since May 2019, Valovaya, a Russian economist, journalist and diplomat, has served as director-general of the Geneva office, a historic first.

But it is not the only large-scale institution presided over by a woman. On March 1, Ngozi Okonjo-Iweala of Nigeria became the first woman, and first African, to take the reins of the WTO, and its 625-strong staff.

Her appointment came five months after that of the Jamaican Pamela Coke-Hamilton to the head of the ITC. With a 120-strong staff, the ITC’s mission is to help small and medium-sized enterprises (SMEs) in developing countries to expand their export activities.

This sweeping egalitarian conquest seems far from over, though.

The United Nations Conference on Trade and Development (UNCTAD) could also soon have a female at its helm. It already does, in fact, on an interim basis.

This goal hasn’t been fully achieved yet, but it’s likely that the U.N. Secretary-General, Portuguese national Antonio Guterres, may have close to his heart the idea of a female appointment to UNCTAD.

Since he came to power four years ago, Guterres has pushed the cause forward.

“I wouldn’t be surprised if it’s a woman who succeeds him,” said Isabelle Durant, the former deputy prime minister of Belgium who, since Feb. 15, has been acting secretary-general of this U.N. agency and its 480 employees.

For Guterres, gender parity at the United Nations is an urgent need.

“It is one of my personal priorities,” he said. “It is a moral duty and an operational necessity. The meaningful inclusion of women in decision-making increases effectiveness and productivity, brings new perspectives and solutions to the table, unlocks greater resources and strengthens efforts across all the three pillars of our work.”

These are evidently more than mere words as 53 percent of Guterres’s undersecretary-generals are female, and he appoints female candidates to important positions as often as he can.

But is this just for show, to hide the bigger picture? How well are women represented in the organization’s lower tiers?

So it is clear that progress is being made toward parity, even if men still largely dominate senior official roles (66.3 percent).

If we consider an economic sector that’s more typically associated with men, women at UNCTAD make up 31 percent of staff at senior management level (and 34 percent of all employees).

Contrary to what women hear all too often, Durant feels there is no shortage of female talent in the economic sector. It’s unconscious bias that underpins the emergence of more men than women in the recruitment process.

“Leadership is not just about male strength, it also means knowing how to bring your teams together, showing empathy and respect,” she says.

Here's another example of this current trend toward feminization: the director-general of the WTO on May 4 nominated two women to her team of four deputies, American Angela Ellard and Costa Rican Anabel Gonzalez.

Again, it’s a first for the institution: “This underscores my commitment to strengthening our organization with talented leaders whilst at the same time achieving gender balance in senior positions,” Okonjo-Iweala declared.

Among other female heads of international organizations, it is worth mentioning that the executive director of UNAIDS, who was appointed in 2020, is Ugandan aeronautical engineer and politician Winnie Byanyima.

The rise of these women has no doubt helped to revitalize the image of an “international” Geneva and its role in major global “multilateral” negotiations, one which was called into question by the United States.

For years, the U.N. system has been committed to the promotion of male-female equality. Since 2015, the U.N. has stepped up the pace through the adoption of the 17 Sustainable Development Goals (SDGs), the fifth of which advocates gender equality.

All these nominations are “much more than just a signal,” according to UNCTAD’s acting secretary-general.

“A woman doesn’t negotiate in the same way, she’s more careful to ensure that it’s done within the walls of the place where discussions are taking place,” Durant explained. “Furthermore, in a general way, us women have more freedom in how we choose to work. Since we don’t have any heritage from the past, we have everything to prove. We have carte blanche, but they’re waiting for us to trip up.”

This is especially true when it comes to the current management of the COVID-19 crisis, since pandemics tend to deepen and accentuate existing inequalities.

“In our view, women must be involved in the post-COVID response,” said Durant, who made her debut in politics in the Belgian Ecolo (Green) party in early 1990s. “It’s not just a question of GDP, it’s also a matter of human capital and sociability. Women are more concerned about community; they can bring their own touch thanks to having greater involvement in the care economy. Women and women’s organizations must be included at the heart of every decision relating to COVID-19.”

And of course, in a wider sense in general.

The High-Level Political Forum, which is held each July in New York, reviews the state of progress made toward the 17 SDGs, including that of gender equality.

The United Nations can, as noted, count on a heavyweight defender of parity in the form of Guterres as well as Valovaya.

“As the first female director-general of the U.N. office in Geneva, and having worked in male-dominated spheres during many years of my career, my ultimate goal is that women and men are granted equal opportunities in my organization and beyond,” Valovaya said. “It is self-evident that we will not achieve any of our goals if half of humanity is left aside.”

The words of Blaise Matthey, director of the Federation des entreprises romandes de Geneve, a Swiss employers’ organization, suggests there is similar sentiment in the economic sector. His mantra is, “The more a company is diverse (gender, age, origins), the better it performs.”