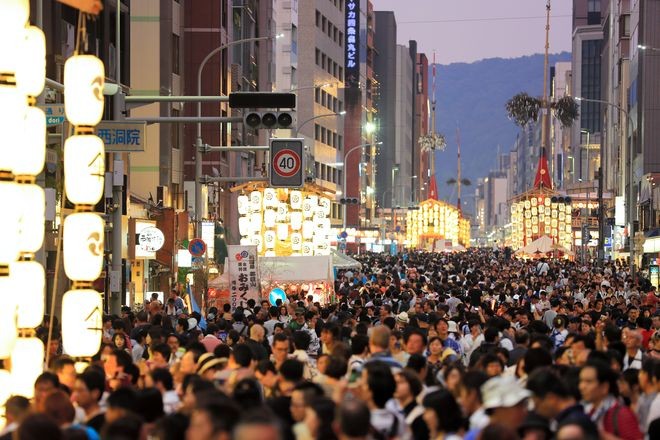 KYOTO--The annual Gion Festival that started on July 1 in the ancient capital will not have its climactic processions of massive, decorative floats--the main highlight of the festival--for the second consecutive year due to the pandemic.

But even with the parades called off, some of the floats will still be assembled for the first time in two years, festival officials said, to keep the traditional float-building technique alive.

The central government has designated the Gion Festival float events, including the assembly process that uses the “nawa garami” (rope tying) method to hold the components together, as an Important Intangible Folk Cultural Property.

Officials from the Gion Festival float federation and Yasakajinja shrine said they will allow the construction if infection-control measures are strictly adhered to.

“This year’s festival is a stopgap for making sure that next year’s Gion Festival will be held as usual,” Ikujiro Kimura, head of the federation, told a news conference on June 17 at the shrine in Kyoto’s Higashiyama Ward.

The more than 1,000-year-old festival takes place here every year to ward off diseases and plagues.

Thirty-three floats currently take part in the Gion Festival float events, aside from the Taka-yama float, which is being rebuilt in preparation for a full return to the festival.

Each of the massive types of floats, some called “yama” and the others “hoko,” is assembled by artisans called the “sakuji-kata” (builders) and is held together using only ropes. Each float is overseen individually by community-based float-preservation associations.

The associations are divided over whether to build the floats this year considering the need to control the spread of the novel coronavirus, with each arriving at its own decision.

Federation officials said that 17 of the preservation associations are planning to build their floats as of July 1.

The Niwatori-hoko float will be assembled, circumstances permitting.

The situation is the same for the Ofune-hoko float.

“Our festival is not just a show,” said Nobusuke Kimura, 51, the head of the Shijo-cho Ofune-hoko preservation association. “It is something that we have to do to chase off the plague.”

The Suzuka-yama float, however, will not be assembled. Suzuka-yama’s preservation association mostly consists of corporate members.

“We decided it is more essential to ensure safety and take public opinion into account,” said Yoshihiro Fukui, 44, a board member for the association.

“We have no reason for building our float, given that no processions will be held,” said Ryuji Ota, 68, the head of the preservation association for the Kuronushi-yama float.

The Gion Festival has two climactic parts to it: the Saki Matsuri (first festival) and the Ato Matsuri (latter festival). Each part culminates in a massive parade of floats called the “Yamahoko Junko” on July 17 and 24.

Construction on a float usually begins about a week before its procession. Once built, the floats enliven the Yoiyama (festival eves), two three-day periods that lead up to the processions.

Festival officials have worked out a new set of rules to allow assembling the floats to the fullest extent possible amid the pandemic.

Each float-preservation association will have to appoint a person in charge of novel coronavirus infection control measures.

Tourists will not be allowed to enter the preservation association meeting places, where decorations and other items will be displayed. Nor will they be allowed to get on the floats.

During the Yoiyama periods, all events, including the performance of festival music on the floats, must wrap up at 7 p.m., when the festival lanterns must also be turned off.

The float federation and preservation associations will hire guards and post them along Shijo-dori street and other locations during the Yoiyama periods to prevent tourists and spectators from forming crowds.