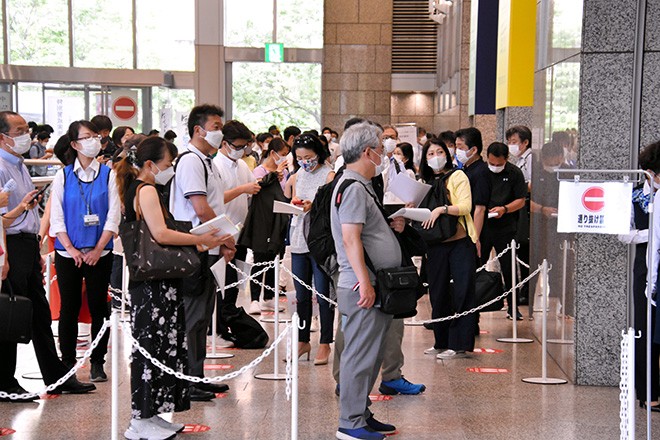 People involved with the Tokyo Olympics line up to receive a vaccine shot at the metropolitan government’s building in Tokyo’s Shinjuku Ward on June 22. (Takashi Endo)

With June 23 marking the start of the one-month countdown to the Tokyo Olympics, the capital was abuzz in anticipation, trepidation and preparation.

Kuniichi Iwasa, 68, of Yokosuka, Kanagawa Prefecture, has been busily preparing to work the Summer Games.

He will captain a ship that will carry Olympic officials to watch the sailing competition.

Breaking free of his busy rehearsal and practice schedule, Iwasa on June 22 traveled to the metropolitan government’s building in Tokyo’s Shinjuku Ward to get a shot of COVID-19 vaccine.

He said he hopes the vaccination “helps to lower the risk of infection and will result in safely staging the competition.”

He is one of more than 6,000 people who are involved with the operation of the Olympics and have been inoculated at the mass vaccination site that the metropolitan government opened on June 18.

Public opinion is a concern, Iwasa said, as many people oppose the staging of the Olympics as the capital battles an increase in COVID-19 cases.

“It is a precious global celebration,” he said. “If it is held safely, I believe the public mood will take an upturn.”

Hitomi Konno, 64, came to the Meguro Ward’s office to take a picture of an Olympic torch on display on June 22.

“It will be the last time for me to see the Olympics in Tokyo,” she said. “I do hope the (organizers) manage to make it happen.”

But a man in his 60s who passed by the torch had zero empathy or enthusiasm.

“It should be canceled, and you, the newspaper, better not report on it,” he warned as he scurried away.

NO TIME TO REST FOR CONSTRUCTION WORKERS

Construction work has continued at a feverish pitch in the new Tokyo waterfront subcenter district, where seven Olympic venues are located.

The man is in charge of building pavilions for Olympic sponsors. But as the opening ceremony approaches, the crew has seen more and more additional orders for construction work coming in.

“We’ve got to force ourselves to finish everything in the remaining month,” he said.

OLYMPIC GIFT SHOP NOT CASHING IN

Not far from the construction site is an official Tokyo 2020 gift shop, located on the third floor of Aqua City Odaiba, looking over the Olympic rings monument.

Miraitowa and Someity, two official Olympic mascots, welcomed visitors at the entrance of 120-square-meter store full of items such as T-shirts and key chains.

A 38-year-old company employee who lives in Koto Ward came to buy Olympic pin badges to commemorate the special summer for her.

She has signed up for volunteer work at rowing and canoe venues.

“It’s not like the coronavirus will disappear if the Olympics are canceled,” she said. “If the Games are held, I want to have fun with them. And I will fulfill my duties.”

But the pre-Olympic business buzz appeared not to be as frantic as the store had hoped.

A 47-year-old woman who lives in Ota Ward and works at a facility for the elderly passed by the store without a backward glance.

“I will not buy anything, and I will not watch any of the Games,” she said.

The woman said holding the Olympics without perfect anti-virus measures in place is inexcusable.

“I have no desire to do any cheerleading,” she said.

(This article was written by Takashi Endo and Yuko Kawasaki.)