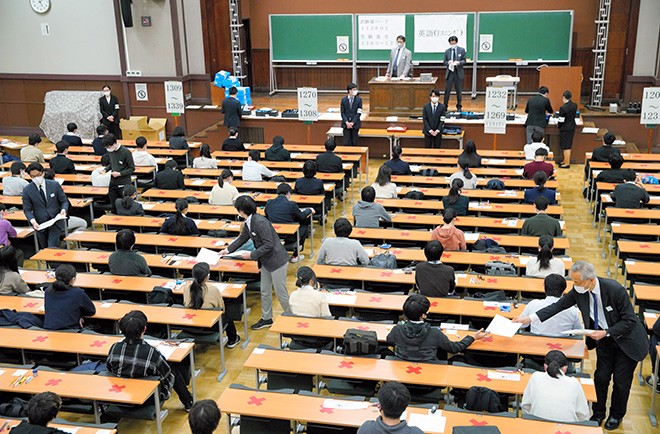 Examinees take the unified university entrance test at the University of Tokyo in the capital’s Bunkyo Ward in January. (Asahi Shimbun file photo)

Difficulty in grading and giving students fair access to the tests have put the use of private-sector English proficiency tests and open-ended questions in doubt for Japan's unified university entrance exams.

An education ministry expert panel on June 22 raised doubts about implementing the changes, which would require written answers in the subjects of Japanese language and mathematics and use private-sector English proficiency tests.

The ministry will make an official decision as early as this summer.

The two main pillars of the entrance exam reform are highly likely not to be introduced for the unified entrance exams in 2025 or later.

The expert panel released a draft report to propose to the ministry what to do with exam open-ended questions and private-sector English proficiency tests.

If such questions are introduced, it will be necessary to grade a large number of exam papers in a short period of time.

The draft pointed out that it will be difficult to secure enough graders, score correctly and for exam takers to assess their grade before getting the official result.

As for the private-sector English proficiency test, the expert panel was concerned that students’ financial conditions or their residential locations could make big differences in their opportunities to take the test.

The draft concluded, “It is not easy to overcome those hurdles. The writing questions and private-sector English tests are both difficult to introduce.”

The expert panel basically agreed with the conclusions and will finish compiling the report.

Initially, the open-ended questions and private-sector English tests were supposed to be introduced for the unified university entrance exam starting this year.

But many people opposed both, saying, “Isn’t it difficult to grade fairly?” and “The regional and financial gap problems have not been solved yet.”

In 2019, the education ministry decided to suspend their introductions. At the end of the same year, it established the expert panel to discuss what to do with university entrance exams, including the unified one.