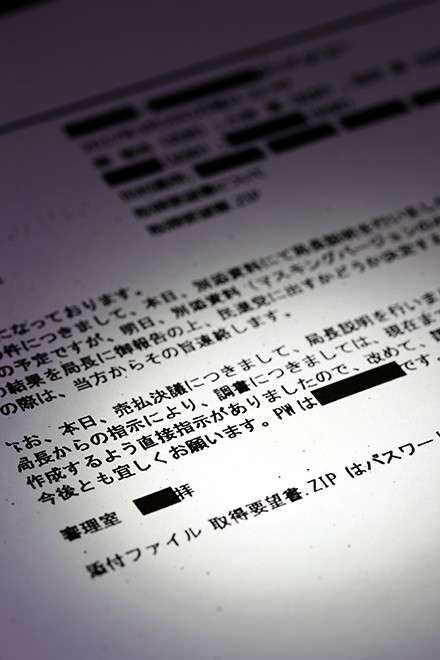 This copy of an email shows a Finance Ministry bureau director-general gave the instructions to falsify documents. (Yoshiaki Arai)

A folder left behind by a Finance Ministry bureaucrat who committed suicide clearly shows that a director-general gave instructions to falsify documents related to a questionable sale of state-owned land.

The file compiled by Toshio Akagi contained copies of emails from the Tokyo headquarters of the Finance Ministry asking, among other things, that references to Akie Abe, the wife of then Prime Minister Shinzo Abe, be deleted from the public documents related to the heavily discounted sale of the land to private school operator Moritomo Gakuen.

One email from Tokyo said instructions had been given by Nobuhisa Sagawa, then director-general of the Finance Ministry’s Financial Bureau, to rewrite the public documents.

Opposition lawmakers had long argued that the steep discount was given to Moritomo Gakuen because of the founder’s close ties to Akie.

Akagi worked at the Kinki Local Finance Bureau where the document falsification occurred before he killed himself in March 2018.

His folder contained a list of individuals who sent the emails, the dates and the contents of the instructions for document falsification.

Sagawa, for example, asked that the documents be revised in line with the responses that he and other Finance Ministry officials gave in Diet questioning, according to the documents.

The so-called Akagi file shows that underlings passed along the orders from Sagawa. But the emails left Kinki Local Finance Bureau officials in the dark about what discussions were being held in Tokyo regarding the document falsification.

The emails from Tokyo not only pointed out what parts of the land-sale documents should be deleted but also asked that the new versions of the documents be sent to Tokyo for verification.

Akagi also included emails that describe the resistance put up by him and his colleagues to the requests from Tokyo to doctor the documents.

On March 8, 2017, Akagi sent an email to Tokyo raising doubts about revising a document regarding the land deal that had already been approved up through the bureaucratic chain. Akagi noted that the Board of Audit was scheduled to look into the matter soon, and he repeatedly suggested that it would be preferable to submit unaltered documents to the board.

But one email also said that the Kinki bureau would replace documents if the Tokyo head office made the change.

The Akagi file showed that higher-ups at the Kinki bureau were pressured into falsifying documents because of impending investigations by not only the Board of Audit but also the Osaka District Public Prosecutors Office.

The release of the Akagi file came after Finance Ministry officials had long refused to even acknowledge the existence of the file. They also used different reasoning to avoid releasing the file despite requests from Diet members and the courts.

An expert on information disclosure said those moves demonstrated the insincerity of Finance Ministry officials.

“While (the officials) have said they will revise management of public documents, it has become clear they are not very enthusiastic about doing so,” said Yukiko Miki, head of the nonprofit organization Access-Info Clearing House. “They likely did not reveal whether the file existed in order to protect themselves, but they only managed to lose the trust of the public.”

(This article was compiled from reports by Yuto Yoneda, Yusuke Morishita, Azusa Kato and Kazuhide Setoguchi.)