Okinawa marks 76th anniversary of the Battle of Okinawa 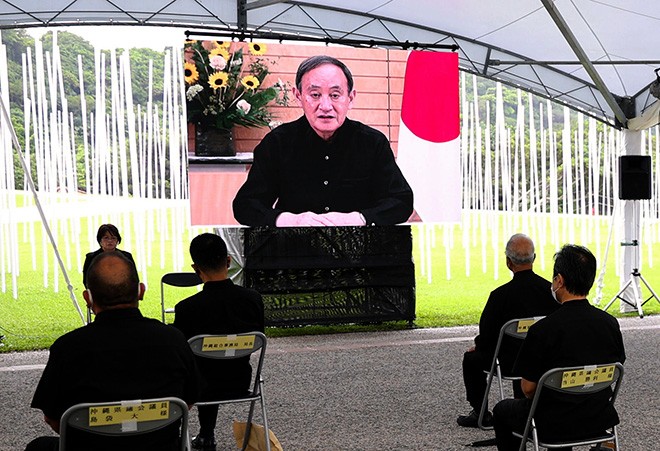 Prime Minister Yoshihide Suga’s video message shown at a memorial service for victims of the 1945 Battle of Okinawa held in the Peace Memorial Park in Itoman, Okinawa Prefecture, on June 23. (Nobuo Fujiwara)

ITOMAN, Okinawa Prefecture--A memorial service held at the Peace Memorial Park here on June 23 paid tribute to the more than 200,000 Japanese and U.S. casualties from the 1945 Battle of Okinawa.

Amid the rain, Okinawa Governor Denny Tamaki and about 30 other people attended the service, which was markedly scaled down due to the coronavirus pandemic, just like last year’s event.

The prefectural government opted out of inviting Prime Minister Yoshihide Suga and other senior central government officials to the ceremony because the pandemic has not subsided.

As memories of the war from 76 years ago fade, Tamaki said the remains of the war dead and dud shells continue to turn up even today.

“The wounds of war have yet to be healed,” he said in his speech.

The governor called on the central government to speed up efforts to recover the remains of the victims and unexploded bombs that lie underground.

In his peace declaration, he pledged to pass down accounts by islanders who experienced the carnage during the war for posterity.

Miharu Uehara, a second-year junior high school student on Miyakojima island, south of Okinawa’s main island, read a peace poem that she composed. Her poem was selected from a total of 1,500 submissions by elementary to high school students in the prefecture.

Her poem, titled "Mirukuyu no Uta" (Songs of peace time), is meant to convey the significance of living on while looking at the "dark past" of Okinawa.

This year, the names of 41 individuals were engraved in the monuments dedicated to victims of the battle, bringing the total to 241,632. The monuments, known as the Cornerstone of Peace, bear the names of all those who died in the battle and the aftermath, regardless of their nationality.

In his speech, Tamaki called for the creation of a forum for the central and prefectural governments to resolve the relocation issue of the U.S. Marine Corps Air Station Futenma in Ginowan in the prefecture.

Okinawans are staunchly opposed to the construction of a new base in the prefecture off the Henoko district of Nagao, which will take over the functions of the Futenma facility. The project signifies a lack of substantial progress in easing Okinawa’s burden of hosting most of the U.S. bases in Japan.

“We would like the central government to reduce our excessive burden in a visible way,” he said of the U.S. bases in his prefecture, which account for 70 percent of such facilities in the country. “We should be free from the thinking that the relocation to Henoko is the only solution.”

Suga’s speech marked his first address regarding the anniversary as prime minister.

“We should never forget the deep wounds Okinawans have experienced due to the war,” he said in a video shown at the memorial.

He vowed to do all the central government can do to ease Okinawa’s base burden, saying, “this situation must be changed by all means.”

But he did not touch on the controversial Henoko issue in the video.