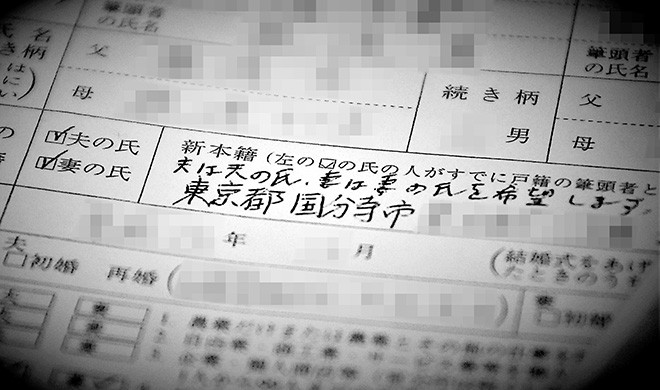 A couple seeking to retain their surnames check the boxes for both of their names in a marriage registration document. (Shunsuke Abe)

The Supreme Court on June 23 for a second time ruled that a legal provision that prevents married couples from registering under separate surnames does not violate the Constitution.

The decision by Chief Justice Naoto Otani and 14 justices of the top court’s Grand Bench dashed the hopes of three couples in Tokyo who argued that the one-surname rule violates the Constitution that guarantees legal equality and freedom of marriage.

The couples are in de facto marriages after their marriage registrations were rejected in 2018, when they checked the boxes for both of their family names instead of choosing just one in the application forms.

They filed a petition with the Adjudication of Domestic Relations at the Tokyo Family Court and its Tachikawa Branch.

Those who want to keep their own surname “cannot legally marry and are discriminated against based on their principles,” the couples said in their petition.

They also said the suggestion that they register under one surname but use a preferred name for business or other purposes was “not a fundamental solution” to the problem, and that the legal provision “has lost its reasonability” in terms of advancements of women in society and changes in public consciousness.

But the Tokyo Family Court and its Tachikawa Branch dismissed the petition, citing the 2015 Supreme Court ruling on the issue.

“Choosing one surname for a family has taken root in society and is reasonable,” and the provision does “not discriminate against one’s principles,” the court said.

The couples then each filed a special appeal with the Supreme Court.

The Grand Bench in 2015 upheld the constitutionality of a long-standing Civil Code stipulation that requires married couples to use the same surname.

The couples argued that social circumstances have changed since 2015, and Diet members have increasingly weighed in on the issue.

Instead of the Civil Code stipulation, the couples targeted the Census Registration Law, which requires married couples to register under the same surname.

But once again the Grand Bench ruled that the one-surname stipulation was constitutional.

Because the special appeal process does not involve the plaintiff or defendant, the proceedings were held behind closed doors, and no oral arguments were presented.