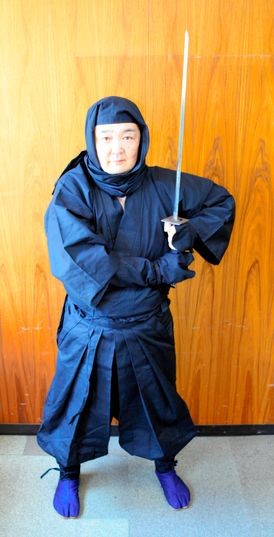 Masaki Kawamura in Osaka on June 9 (Photo by Naoyuki Mori)

OSAKA--Last summer, Masaki Kawamura reflected on how he wanted to spend his post-retirement life after leaving a city youth services foundation here, his workplace of 38 years.

For the active 60-year-old man, the usual popular pastimes such as golf or gardening were not for him.

“I have so far been a self-taught amateur of ninja, who has acquired knowledge by reading books and otherwise, but I now wish to take up the subject in earnest in graduate school,” Kawamura said he thought at the time.

In spring this year, he embarked on his second stint as a student to specialize in ninja studies, his longtime passion.

The graduate school of Mie University, where Kawamura is now enrolled, is the only one school in Japan that offers “ninja and ninjutsu studies” as a specialty subject. Ninjutsu is Japanese for the art of ninja.

An employee of Association Youth Service Osaka City (AYS Osaka, where the acronym should be pronounced “ice”), a general incorporated foundation, Kawamura passed the graduate school’s entrance examination ahead of his mandatory retirement, which was scheduled this past spring. He was the only new student to specialize in ninja studies.

Kawamura plans to spend four years learning about ninja at the graduate school based in Tsu, the capital of Mie Prefecture, close to one of the historical centers of the feudal-age undercover agents.

During his previous stint as student, as a young man, Kawamura volunteered to teach children how to cook rice outdoors and do other things at the Iga Youth Outdoor Center in Iga, Mie Prefecture. The facility for outdoor activities, operated by the Osaka city government, closed in 2014.

Kawamura became interested in ninja around the same time. Iga is known for having been home to a major school of the stealthy tribe.

“Couldn’t ninja be combined with the practice of camping?” he asked himself at the time.

Kawamura landed a job with AYS Osaka after he graduated from university.

In 1990, he was the initiator of a plan for organizing a “hands-on ninja camp” program.

It allowed elementary school pupils from Osaka Prefecture to don ninja costumes in Koka, Shiga Prefecture, another historical center of the ninja tradition, where they were given hands-on experiences in the use of “shuriken” throwing stars and the art of crossing a water surface in ninja "tabi" boots.

They also camped for four days and three nights in Iga’s mountains.

The program fascinated children. Some 200 of them took part in a single camping tour on one occasion.

Kawamura had a shuriken-throwing space and an adventure playground built on the grounds of the Iga Youth Outdoor Center. He gradually came to believe his ninja-themed program led children to take an interest in nature and develop consideration and respect for their peers.

Last autumn, he began preparing for the entrance exam to the Mie University graduate school.

He took the exam in February, and learned about his acceptance on the university website.

“I felt relieved, because I had told others in advance that I was taking the exam,” he said.

Kawamura was re-employed by AYS Osaka from April, and he continues to work there five days a week. He went to Mie University in April for an enrollment ceremony and a health checkup, but he has not been back since because of the COVID-19 pandemic.

Every Thursday, Kawamura attends online classes at his home, from morning through evening, to study the deciphering of antique documents, the history of ninja and other subjects.

He also studies by himself at his home at night, after returning from work, and in the early morning, before going to work.

“The deciphering of old documents is grueling training, but I find fun in studying now,” he said. “I am also looking forward to a practical program in ninja training, which will be held in the mountains of Iga.”

He said his goal for the future is to draw on what he has learned in the graduate school to develop new hands-on ninja programs.

A professor with Mie University’s Faculty of Humanities, Law and Economics, Yamada is a leading authority on ninja studies.

“I hope Kawamura will draw on his past experiences to finish a master’s thesis of a sort that nobody else could write,” Yamada added.

Born in Osaka’s Nishi-Yodogawa Ward in 1961, Kawamura now resides in the city’s Joto Ward. He is currently director of the Rurikei Youth Nature Study Center in Nantan, Kyoto Prefecture, operated by the Kyoto prefectural government and administered by AYS Osaka and a partner.

Kawamura has many licenses and qualifications, just as if he were a ninja himself.